Ans:- Among Hardy’s women characters, Elizabeth Jane is the most carefully studied and also the most attractive. Hardy himself calls her “the finest Bower of Nature”. Character of Elizabeth Jane

When first we become interested in her, she is ignorant unformed girl kept back by the narrow circumstances of her upbringing from charm or comeliness, but with indications that in more favorable surroundings she would blossom into a pleasant-looking and full-grown maiden.

Read more from English 2nd Year (click) Elizabeth Jane is the perfect primrose in the garden of Wessex. Hardy has seldom painted a woman with such tenderness as what he bestows on this child of nature. In her character, the following traits are, however, to be noted.

Elizabeth jane in the mayor of Casterbridge

Elizabeth has got a pleasing and lovable personality, though she may not be called a great beauty. When she comes with Susan to Casterbridge. she does not appear to be so attractive, perhaps due to the buffets of life.

“Her face, though somewhat wan and incomplete, possessed the raw materials of beauty to a promising degree. There was an under handsomeness in it struggling to reveal itself through the provisional curves of immaturity, and the casual disfigurement that resulted in the straitened circumstances of their lives.”

The people of Casterbridge admire her beauty and she herself wonders at her appearance: “Good Heaven, here am I setting UP as the town beauty.”

Elizabeth Jane Newson Character Analysis in the mayor of Casterbridge

Her Desire for Knowledge

There is inherent in her an urge for leaming and a desire for refinement. She is always anxious to see, to hear, and to understand things. When she finds herself highly beautiful., her excessive joy is at once shaded with her ignorance illiteracy.

She feels that she is an unfinished girl. That is why she decides, “Better sell all this finery and buy me grammar books and dictionaries and history of all the philosophies !”How could she become a ‘Woman, a Woman of wider knowledge, higher repute, – ‘better as she termed it, this was her constant inquiry of her mother. Character of Elizabeth Jane

Her Sympathy and Obedience

Sympathy is her foremost quality, “If there was one good thing more than another which characterized this single-hearted girl, it was a willingness to sacrifice her personal comfort and dignity to the commonweal.”

She is the most inoffensive, harmless’ creature. She sympathizes even with those at whose hands she suffers in one way or the other. Even when Lucetta has frustrated her love by marrying Farfrae, she does not embitter her relations with her: “If her loyalty to Henchard is admirable, her friendliness towards Lucetta is really amazing.”

Her meek and submissive ‘nature has made her an obedient creature, First she obeys Susan, then Henchard. When’Henchard sees. Farfrae showing amorous inclinations towards her, he asks her to stop all advances, which she obeys with sincerity.

Then she does not exhibit any remorse or retaliation upon his constant chidings and scoldings. Like an obedient daughter, she bears them all, In fact, She is an embodiment of submissiveness.

If her character is studied thoroughly, she certainly appears to be an ideal girl. Far from all sophistication, she is a lover of simplicity. She believes in simple living and high thinking. She is a maiden characterized by “earnestness and soberness of mien.”

About the life she feels, as it actually is, that life is a tragic rather than comical thing; that though one can be gay on occasion, moments of gaiety are interludes and no part of the actual drama.

When Henchard adopts Susan and her, she does not become vain and flirts because she believes, ‘It.

Elizabeth is no less wise, though she is not educated. Although the youngest, Elizabeth is the wisest character in the novel. She has a keen insight and crystalline transparency which amounts to genius.

Her wisdom in various matters is marvelous. While others are.swayed by their passions and impulses she is the only character who can maintain her poise even in the most crucial situations.

The bull incident and the skimming on do not deter her courage, Even in the management of his small trade which he takes up after the tum of fortune.

Henchard leaves everything to her care. Her wise care helps the business flourish rapidly. On several occasions, her wisdom impresses us marvelously.

One of the most remarkable traits of her character is her sacrificing nature. Elizabeth is never selfish.

She relinquished her own claims in favor of those of others and is always willing to sacrifice her personal comforts, and dignity for the sake of others. While at the Three Mariners, she thinks of serving others.

It is this considerate disposition that leads her to do even servant’s work herself When Henchard, fails in business; her heart goes out to him. During the days of his deepest loneliness, she comes to live with him to cheer him up forgetting his past rudeness to her. Character of Elizabeth Jane

Again she cannot bear the thought of Farfrae being injured by this desperate enemy, Henchard, and takes the unusual course of meeting him early in the morning to warn him.

Sketch the character of Elizabeth Jane

Thus Elizabeth Jane is, above all, the best-portrayed character of Hardy.

Her character may best be summarized in the words of Point, “Hardy has seldom painted a woman with such tenderness as that which he bestows on this child of nature with her single-minded enthusiasm for learning, her natural delicacy, and good sense.

She recalls Gabriel Oak in her steadfast honesty of purpose and judges in her ambition to acquire knowledge.

She forms a kind of stability in the drama like Shakespeare’s Horatio in Hamlet, and Kent in Lear to remind us that, in spite of human passions and tragic storms, the most ancient heavens are fresh and strong and the external vanities that prevail.

It is fitting too, that the short account of her tranquil married life should end with the tragedy on that note of quiet and reconciliation ‘peace of mind, all passion spent with which the Greeks closed’ their tragic drama.

In the end, Hardy’s words about Elizabeth Jane are also noteworthy, “She, had learned the lesson of renunciation and was as familiar with the wreck of each day’s wishes as with the diurnal setting of the sun. Character of Elizabeth Jane

If her earthly career had taught her few book philosophies it had at least well practiced her in this. 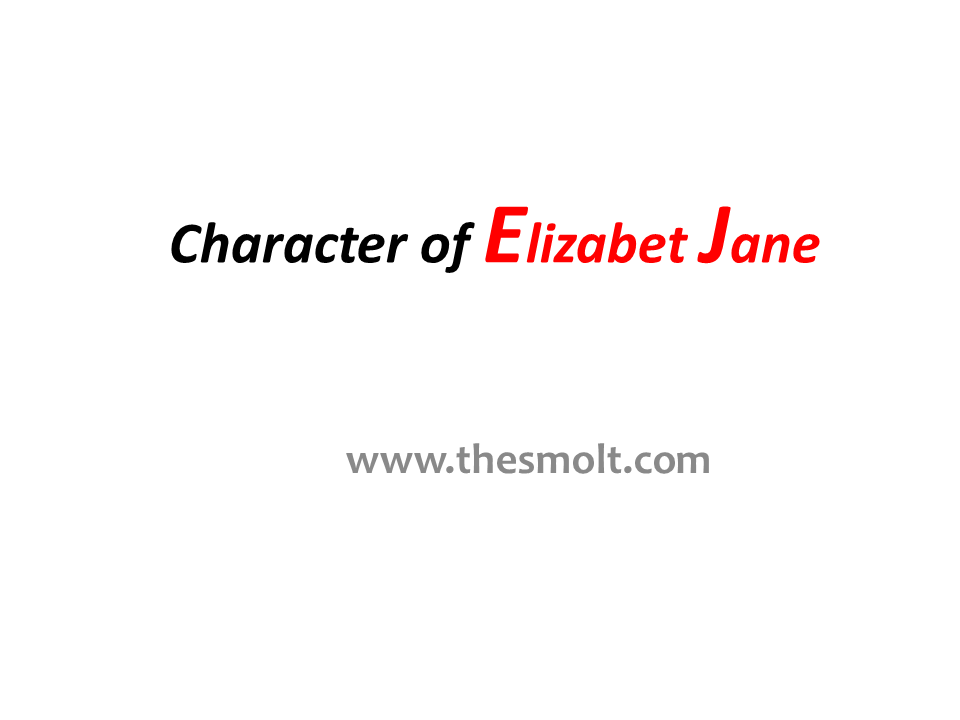 Note:- If you want to Download This article’s in PDF form, then simply go (Top or Bottom of) Right corner and click on the PRINT icon, and it’s saved as a PDF of Character of Elizabeth Jane

Best Regards Character of Elizabeth Jane, Kindly we request to you after Installing This Application, Please Don’t forget to give your feedback.