Ans:- Leicester Hemingway, the brother of Emest Hemingway, states in his biography that Hemingway’s happiness knew no bounds when he had a kid brother, Santiago who reflects Hemingway’s chàracter had a kind of kid brother in Manolin. K. Graham writes, “The boy Manolin is a type, of an individual. Sketch the character of Manolin

Read more from English 2nd Year (click) He is the Faithful Affrentice, who tends the old man, studies his ways, and embodies hope for the future. He is used successfully by Hemingway in this story, the point is that he is used. That is, the boy conveys little sense of having an existence outside the story.

He is a function of the story and a device to carry out the story’s intentions. ‘ Character” in fiction usually present two aspects, that having a life and that of having a function. The emphasis varies from work to work, but there is almost always a mixture of both aspects.

Old man and the Sea character

In some works, the sense of a character living outside the boundaries of the story is very strong. The most famous example of this might be the character of Shakespeare’s Hamlet, but one could also suggest examples such as Mark Jwain’s Huckleberry Finn’ or marry of Leo Tolstoy’s characters in there works, the character is more obviously part of the structure and argument.

They may appear as symbols or caricatures or as in this case of the Old Man and the Sea aboard the recognizable type of humanity Fictional characters that tend more towards function than towards individual life should not be seen as necessarily inferior for that reason, but simply as belonging to a somewhat different mode of art, and when we call Santiago and Manolin type we are not criticizing Hemingway’s are, only trying to identify the kind of art it is.

Old man and the Sea by Ernest Hemingway

The love of Manolin for the old man Santiago is so deep that it does not care for the barries of age, country, and blood. The religion, however, does not come in the way of this relationship. The boy has high regard and appreciation for the old man’s ability of fishing.

He is very helpful to Santiago. He always accompanies the old man. The boy is so concerned about the old man that he goes to the extent of begging for the sake of the old man.

He could not see the old man going out for fishing expeditions starved or half-starved. The boys’ high regard is reserved for the old man for it is he who taught him the art of fishing. Thus Manolin is a true disciple and a symbol of worldly to Santiago.

Sentiments and emotions do not come in the way of the old man’s relationship with Manolin. Their relationship is based on mutual faith and a good understanding of each other’s temperament. The boy prepares the old man for the future by reminding him of his continued loss of physical strength.

He often asks the old man whether he has enough strength for the strong fish. He reminds the old man by saying  The best fisherman is you.” The old man reciprocates the sentiments of the young boy.

Character sketch of the old man and the sea

He serves the boy by walking him in the morning. He has sympathy for the old man. He weeps for the old man whose hands are cut. He is pained to think of the trauma the old man must have gone through in his three day battle against the marlin.

The old man tells him that he spat something strange as if something was broken in his chest, the boy consoles him, “Get that good toolie down, old man and I will bring you your clean shirt. And something to eat. The boy is in a fix.

He knows that the old man is going to die, yet he consoles him and tells him that he will recover very soon. However, the boy weeps in his heart of hearts for the old man as he is aware of the inevitable and of the old man. The boy in the novel.

The Man and the sea is a technical necessity. The story demanded that the old man should unsaved his life and condition to someone. The appearance of the boy fulfills that need.

It is also very strange to see that we leam a lot about the character Santiago through Manolin, Santiago would have lost much of his glory without the companionship of the young boy.

Character in the old man and the sea

The presence of the boy plays an allegorical function in the novel. The courage and the strength of the old man’s youth are invoked through the young boy. Sketch the character of Manolin

The old man draws strength and energy from the young boy. The old man needs the presence of the boy at every moment, “I wish the boy were here and that I had some salt… The boy keeps me alive. I must not device myself too much.” In Menolin, we see the immorality of Santiago. Sketch the character of Manolin

. Thus the boy is important to the symbolic purpose of the novel. He is a vital emotional need of the old man. Also, the boy tends to soften the hand and tragic tone of the novel and its contents. The novel is full of hope, love, kindliness, and faith because of the boy.

Though he does not play an active part in the development of the physical action, he is an essential part of the novel. The old man and the sea. Sketch the character of Manolin 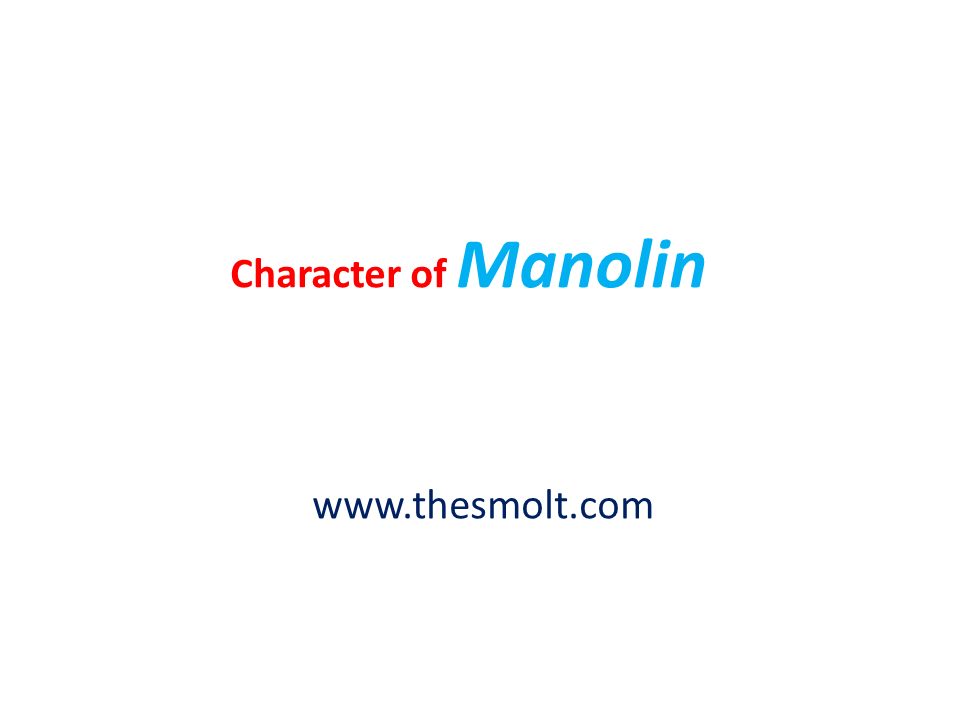 Note:- If you want to Download This article’s in PDF form, then simply go (Top or Bottom of) Right corner and click on the PRINT icon, and it’s saved as a PDF of Sketch the character of Manolin

Best Regards Sketch the character of Manolin, Kindly we request to you after Installing This Application, Please Don’t forget to give your feedback.