Ans:- Charles Lamb (1775-1834) has rightly been called the Prince of English Essayists, for his essays touch perfection. No other essayist has possessed in an equal degree the power to charm. Charles Lamb as an essayist

Read more from 1st Year (click) The charm of his essays is the charm of his personality. It is the sweetness of his nature that makes Lamb such a lovable writer. Lamb was one of the most autobiographical of English essayists and his essays at every step reflect his nobility of soul, his good nature, his charity, his simplicity, innocence, and boundless kindliness.

Charles lamb as an essayist assignment

He takes the, readers freely into his confidence and chats with them frankly as wit an intimate friend. He communicates with his readers about his friends, relatives, joys and sorrows, likes, and dislikes.

. It is possible, (from a study of the Essays of Elia to reconstruct the whole of his life from beginning to end. Dream Children, My Relations, Christ Hospital, etc., are all replete with a hundred self-revelations. Even in his essay The Convalescent, he tells us of his selfishness during an illness and how the arrival of the letter of his editor made him conscious of the outer world and his duties as a writer.

No doubt, he often tries to conceal the facts of his life and mingles them with fiction, but he seldom succeeds in hiding the reality. His mystifications are of no avail The truth is always transparent behind the disguise.

His essays are full of wisdom and good sense. From beginning to end they are instinct with wisdom. Lamb was one of the wisest of men gifted with a sound common sense. He had a marvelous power of comprehension and interpretation.

His critical essays are a living testimony to his shrewdness and penetration, He is uniformly right in his opinions. But his rare wisdom and insight have been properly appreciated neither by the readers nor by his closest friends and relatives.

.He always tries to conceal it by a playful, jesting manner. He flings a profound truth in a jest. His playfulness blinds the readers to the serious thought that lies behind it.

The most outstanding quality of Charles lamb as an Essayist is the exquisite mingling of humor and pathos. There is an element of exaggeration in Lamb’s humor. His frequent exaggerations make the readers smile.

Many examples of such humorous exaggerations can easily be quoted from his essays. Poor Relations, Christ Hospital, The Convalescent; and several other essays.

Another factor in his humor is that iteration, “Which is anything but damnable” and which can be illustrated from any one of his essays. The Convalescent and Poor Relations are rich in humor arising from constant repetition.

Other factors contributing to his humor are the flavor of antique style and the use of a large number of whimsical, strange metaphors as in the opening passage of The Poor Relations.

His humour in short is unique. There is no humorist more original than Charles Lamb. This humor invariably and exquisitely mingles with pathos and thus heightens the charms of his essays.

LAMB AS AN ESSAYIST

Lamb was a highly sensitive person and his heart was touched to the quick by the sight of suffering. He had himself suffered in life and so could feel deeply for the sufferings of others.

Suffering always moves him to the splendor of writing, unequaled in the entire field of literature. The close of the Dream Children is remarkable for its blend of humor and pathos.

This every blend is also seen in Old China, in Poor Relations, and other essays. His treatment of the Convalescent is pathetic in the extreme. It touches the heart of the readers. They are made to see the sufferings of his soul.

Charles lamb as an essayist describe

They feel for him though all the while they may be smiling at his selfishness and his various expressions of his weaknesses. However much Lamb may try to hide his charity, his largeness of heart, his affinity for the poor and the suffering, behind a playful, humorous style, he never succeeds in his purpose.

His essays, even the most humorous ones, have an unmistakable pathetic atmosphere about them. Lamb, in short, possessed the ideal essay manner and his essays are among the finest in the English language. 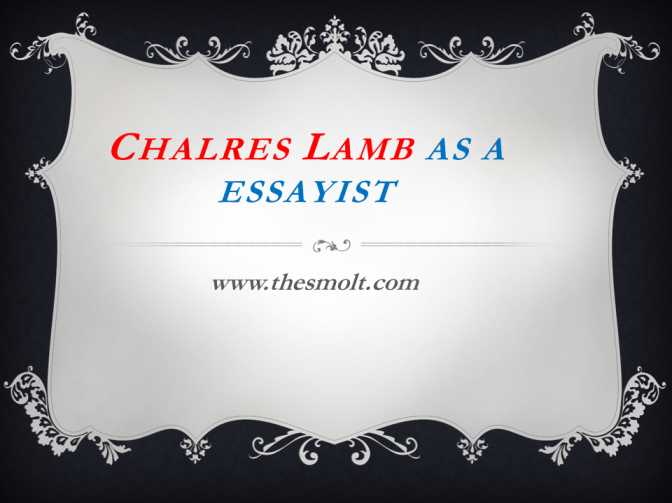 Examine Charles Lamb as an essayist

Note:- If you want to Download This article’s in PDF form, then simply go (Top or Bottom of) Right corner and click on the PRINT icon, and it’s saved as a PDF of Charles Lamb as an essayist

Best Regards Charles Lamb as an essayist, Kindly we request to you after Installing This Application, Please Don’t forget to give your feedback.