Ans. In his plays, particularly the tragedies, Shakespeare makes frequent use of the ‘supernatural’. Nicoll remarks that “By this means an otherwise sordid story of murder and revenge has been carried to a high level and assumes at mice a peculiar significance of its own”. The supernatural element plays a vital role in intensifying the tragic effect and universalizing the appeal of the Shakespearean plays, particularly of his tragedies. Supernatural elements in Macbeth

This supernatural, element manifests itself in various forms such as witches, ghosts, apparitions, hallucinate?ns, thunder and storm and malignant fate. Their presence in the plays Implles helplessness of man and the hands of the unseen power and also the existence of a superhuman force that delights in the torture and spiritual agony of human beings.Supernatural elements in Macbeth

They are so haggard, ragged and hideous appearances that Banquo exclaims at their sight: What are these? So withered and wild in their attire That looks not like me inhabitants O’ the earth, And yet is on it The three Witches not only influence and control the character and actions of Macbeth, but also-govern the plot of the tragedy. These creatures are the agents of Satan, as they are all for evil: Fair is foul and foul is fair: Hover through the fog and filthy air. Prof.

Role of supernatural elements in Macbeth

Dowden tries to describe the Witches: “They are grotesque, they are also sublime.. they tingly in every fiber with evil energy, as the tempest does with electric current, their malignity is inexhaustible; they are wells of sin springing up into everlasting death: they have their raptures and ecstasies in crime; they snatch with delight at the relics of impiety and foul disease; they are awful inspirers of murder, insanity, and suicide. They are powers auxiliary to the vice which exist outside ourselves”.

Dowden’s observation is fully justified when we find how then first they meet Macbeth, they fire him with ambition and suggest to “him to capture the throne of Scotland by murdering the old king. Nevertheless, the importance of the three Witches can hardly be exaggerated. in this regard, Brandes remarks, “with the Witches’ meeting Shakespeare strikes the key-note of the drama at the very outset, as surely as.

with a tuning fork, and wherever the Witches reappear the same note recurs. The Witches on the heath, the scene before the murder of Duncan; the sleepwalking of Lady Macbeth – so potent is the effect of these and other episodes .s that they are bunt forever on the spectator’s memory”. Likewise, Coleridge remarks,” The Weird Sisters are as true a creation of Shakespeare’s as his Ariel and Caliban. Supernatural elements in Macbeth

They are wholly different from any representation of Witches in the contemporary writers, and represented a sufficient external resemblance to the creatures of vulgar prejudice to act immediately on the audience.” Ghost in Macbeth serves the same dramatic purpose as is done by the Witches. They lend the play the charm of awe, fear, and mystery. Supernatural elements in Macbeth

They are “a reminder of the existence and immanence of more things in heaven and earth than are dreamt of in our everyday philOsophy, a warning that at all times, but most in its lapses, humanity has to reckon with not flesh and blood alone, but, principalities and powers of the unseen world.”

Discuss the role played by supernatural elements in Macbeth

In Macbeth, it is the subjective ghost that appears. It is the ghost of. Banquo, visible only to Macbeth to whom it is intended. When the ghost comes and occupies the chair of Macbeth in the Banquet scene, the atmosphere of the play becomes impenetrably more admirable, both psychologically and scenically, is the scene in which Macbeth sees Banquo’s ghost sitting in his seat at the banquet table. The grandeur, depth and extraordinary dramatic and theatrical effect of this passage are almost unequaled in the history of the drama.”

Write a critical note on the supernatural element in Macbeth

Banquo’s ghost is often interpreted by critics as the creation of the heated imagination and horror-stricken spirit of Macbeth. Lady Macbeth says: O proper stuff! This is the very painting of your fear. The second ghost, which some critics call that of Banquo, but some call it of Duncan, further intensifies the tragic tone of the drama, Apparitions, and Hallucinations Apparitions and hallucinations also appear in Macbeth.

They are no less mysterious and awe-inspiring than the ghosts. The ‘air drawn’ dagger seen by Macbeth before the murder of Duncan is an example of the apparition. The dagger scene by Macbeth is a subjective creation-the dagger pointing to the bed-chamber of the old king. Macbeth himself is conscious of the deceptiveness of the dagger: Supernatural elements in Macbeth

Is this a dagger which I see before me, … or art thou but A dagger of the mind, a false creàtion, Proceeding from the heat oppressed brain? When Macbeth again meets the witches, they present before his sight a series of apparitions, all hideous and frightening. One is “an armed head”, another is “bloody child”, yet another is “a child with a tree in his hand.”

Discuss the significance of the use of the supernatural in Macbeth

Thus, it may be noted that Shakespeare uses the supernatural with a definite dramatic purpose. By creating an atmosphere of mystery, awe, and terror, he heightens the intensity of his tragic tales. Without the intervention of the supernatural, his tragedies would not what they are. Supernatural elements in Macbeth 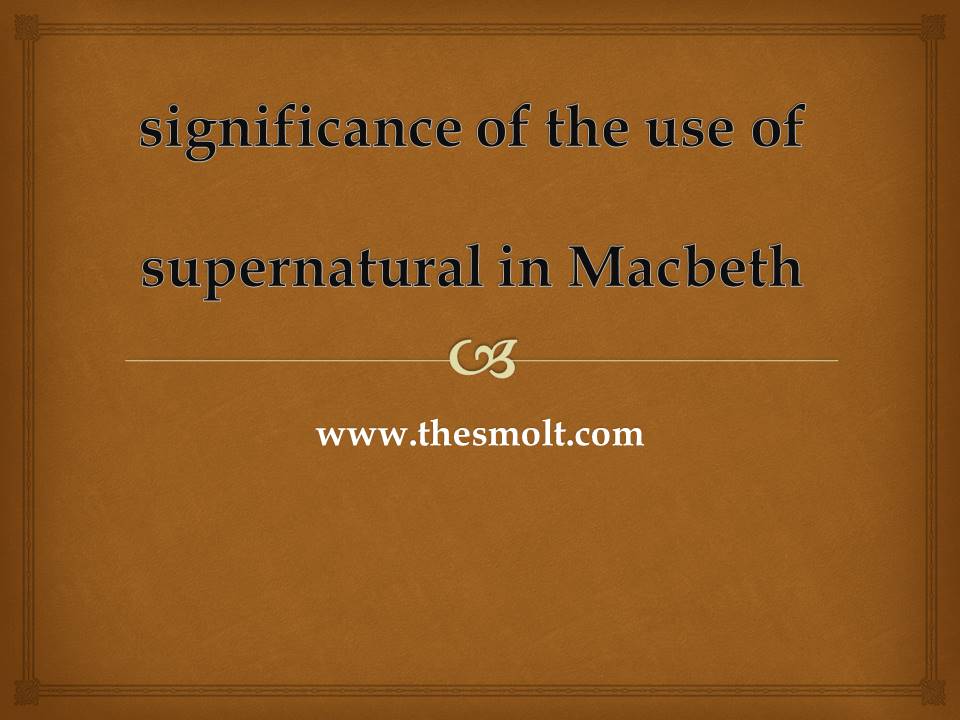