Ans. Thomas Stearns Eliot (1888-1965) wash the leading dramatist of the 20th century in the English language and literature. It was he who was largely responsible for a new orientation towards verse drama. Write short notes on T S Eliot as a dramatist

He was aptly called a major force in the rebirth of the poetic drama of the modern century. He wrote famous plays

T S Eliot as a dramatist

The Success attained by Eliot as a dramatist shattered his contemporaries. The play, Murder in the Cathedral’, Carries great intensity of spiritual note. It combined poetic choruses with poetic inspiration. Eliot’s concrete and vivid images are explicit.

It is in a true sense both dramatic and inconceivable in prose. All the characters sketched in the book carry great significance as well as personification. It does not discuss the violent killing of Saint Thomas on the other hand, it deals with a confrontation over the various temptation.

The Family Reunion is much different about religion, Eliot regarded display as a drama of contemporary people and it deals with the problem of sin and its expiation. The persons drawn in this play carry significant thought. This play is a unique example of material pressed into an alien invalid. The Third Play of Eliot was The Cocktail party which deals with minimum imagery.

The characters present conscious and lucid statements having no vagueness. Eliot discusses the theme is a common and humorous manner. There lies ironic sentiment in the presentation of the thoughts. The role of Edward, Lavinia, Henry Harcourt, and others are of hight order. Eliot points out the loneliness in the life of a woman is aking to suicidal.

Eliot delineates the situations and understanding in a subtle and natural manner. This play can be called as depressing and grim in effect. It is mainly based on the idea of atonement and it carries the tradition of certain catholic conception. It accentuates the inhumanity, despaired and tragic sentiments. “The Confidential Clerk’, (1953), is a pessimistic and depressing play.

Eliot has sketched the characters in common sentiments. The Elder Statesman’ (1958), deals with the incidents of retired life of a statesman. He had been a distinguished fellow inactive life. He had been honored and applauded due to his positive role as a statesman.

This play is subtle in conception and exuberance in human treatment. As a dramatist, T. S. Eliot has dealt with religious, secular and psychological themes in his play in a poetic style. He is aptly regarded as a cynosure in the sky of English literature. Eliot was quite conscious of the existing and baffling problem of modern persons. He was a grim realist as well as chimerical.

As a poet, he also presented human sentiments and realization in true sense. All great literary creations carry emotional development and his talent can be visualized in his dramatic intensity and realistic arguments. Write short notes on T S Eliot as a dramatist. 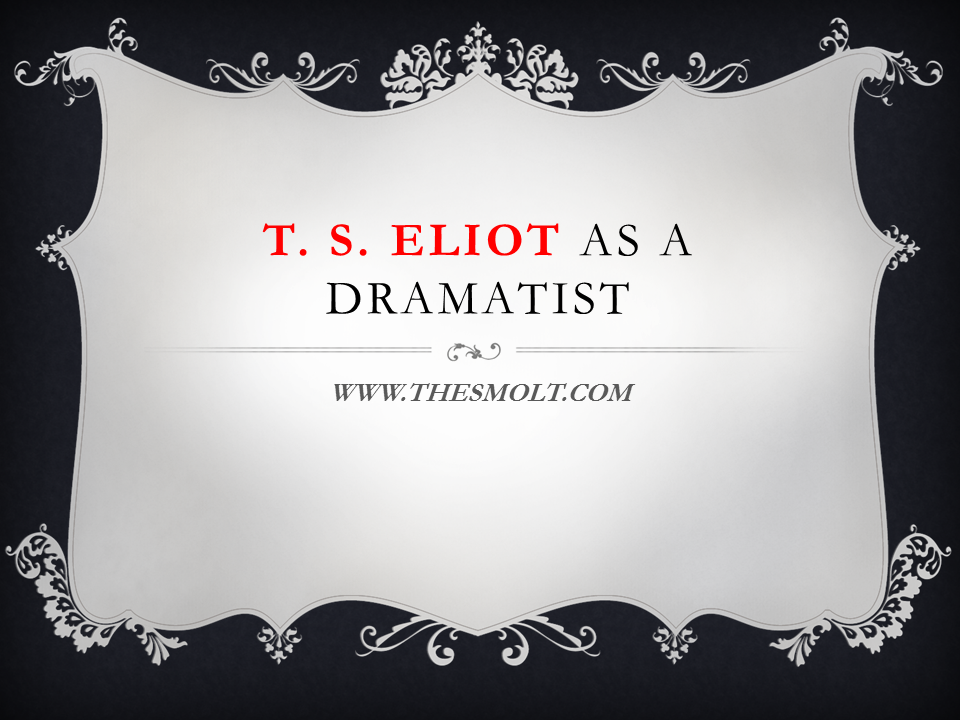