Ans. The title of Oscar Wilde’s play, The Importance of Being Earnest is a typical Wildean firework going a clue as to the light nature of the comedy that is presented to the audience. The title of the play derives its punch based on a pun on the word ‘Earnest’ and its pronunciation as ‘Ernest”. In the former connotation, it means ‘Serious’ or ‘determine’. Justify the title of the play

l stresses the importance or the necessity of bearing the name ‘Ernest. Much of the complications of this splendid comedy arise out of the confusions and misunderstandings caused on account of the fictional identity created for his convenience under the pseudonym Emest’ by the hero of the play. Jack Worthing By a stranger twist of the plot, this none-existent ‘Ernest’ gains real life and gets merged with the hero, Jack Worthing and solves the complications standing in the way of the twin marriages of Jack and Algernon.

Jack Worthing, the hero of the play and the guardian of the beautiful teen-aged girl, Cecity Cardew has to maintain a strict moral tone and an atmosphere of seriousness at home in his country, Manor House at Woolen. Added to this, he is the Justice of the Peace of the country. To escape the tedium of forced moral tone at home, he invents a fictitious younger brother named Ernest who is supposed to be very wicked and leading a reckless life in London.

Under the excuse of visiting his brother ‘Emest in London to straighten his affairs, Jack Worthing indulges in a life of pleasure there. During one such visit to London, he falls in love with the fair young girl, Gwendolen Fairfax, the niece of his friend Algernon and the daughter Lady Bracknell, the aunt of Algernon. Even Algernon Knows Jack only as Emest Worthing.

Only after a considerable amount of persuasion. Algernon, Jack reveals him the secret of his double identity. He also pleasures from the town to the country under his assumed name ‘Bunbury’. Gwendolen Fairfax feels attracted to Jack Worthing taking a fancy merely for his assumed name ‘Ernest for the word ‘Emest’ produced vibrations in her heart. justify the title of the play

She has fallen in love with him ever since she heard from cousin Algernon that he has a friend called ‘Ernest’ Jack wants to get rid of his double, “Ernest’ as his ward Cecily Cardew has begun to develop an attraction for the wicked Ernest’, the supposed brother of her guardian. Even before Jack returns to the country, Algernon goes ‘Bunburying’ to Jack’s country home and makes an advance to Cecily Cardew under the identity of Jack’s wicked brother ‘Ernest’ Cecily who has been dreaming to marry a young man of the name ‘Ernest fulls in love with him and gets proposed by him.

Just then, Jack returns to his country home in the morning-dress announcing that his brother Emest has died of a “Chill” in Paris. While the priest Dr. Chasuble and Cecily’s governess Miss Prism offer to console Jack for his bereavement, there comes Cecily informing Jack that his brother ‘Ernest who has already arrived there is waiting for him. When Jack meets Algemon who is posing as ‘Ernest’ and courting Cecily, he is angry with him and asks him to clear away at once.

What does the title of The Importance of Being Earnest mean

Jack meets Dr. Chasuble and requests him to christen him that evening. Jack is desirous of getting himself christened ‘Emest to marry Gwendolen who does not like the name Jack as it is ‘domesticity for John’, A little later Algernon also proceeds to meet Dr. Chasuble to get himself rechristened ‘Emest’ to satisfy the unrelenting fancy of Cecily and to marry her.

But Gwendolen tells Cecily that he is her cousin, Algernon. Then when Jack arrives there, Cecity tells Gwendolen that he is Jack Worthing, her guardian and the brother of Ernest Worthing. At this point Jack denies his having any brother at all. The two young ladies now come to know of the deceit played on them by Jack and Algy. They sink their quarrel and become friendly. But they feel that they both cannot hope to marry as ‘Ernest’ does not at all exist.

Though angry with Jack and Algy at first, the young ladies soon forgive their suitors on knowing that their deceit was an outcome of their desire to meet them and woo them. Soon their arrives Lady Bracknell in search of her daughter, Gwendolen. On hearing about Miss Prism serving as Cecily’s governess, she has her summoned before her. From her entry of Miss Prism, we come to know that Jack was the long-lost child of her sister, Mrs. Moncrieff.

From verification of military records, he comes to know that he is the son of ‘Ernest John Moncrieff. So it is found that his Christian name is Ernest. So is the case of Algernon who is the brother of Jack. The only obstriction for Jack and Algernon into marrying Gwendolen and Cecily, namely the name ‘Ernest being cleared, they are-the Ernest brothers able to marry the objects of their love. justify the title of the play

Wilde has constructed his plot out of improbable action, add and bizarre coincidence, and incredible characters, The entice play deals with petty things such as cucumber sandwiches, muffins, and teacakes, about a couple of gentlemen and ladies who are frivolous to the very core with the gentlemen showing double identity each and with the ladies insisting on marrying only Ernests, about Jack gaining an identity and a name. It is full of trivial episodes, such as the cigarette-case episode and the handbag episode.

Thus the play is constructal on the strength of pun and the plot towns on a misconception over the name ‘Ernest’. The theme is an attack on earnestness, that is, the Victorian priggishness, hypocrisy and false sense of class-consciousness. justify the title of the play

Justify the title of the play The Importance of Being Earnest 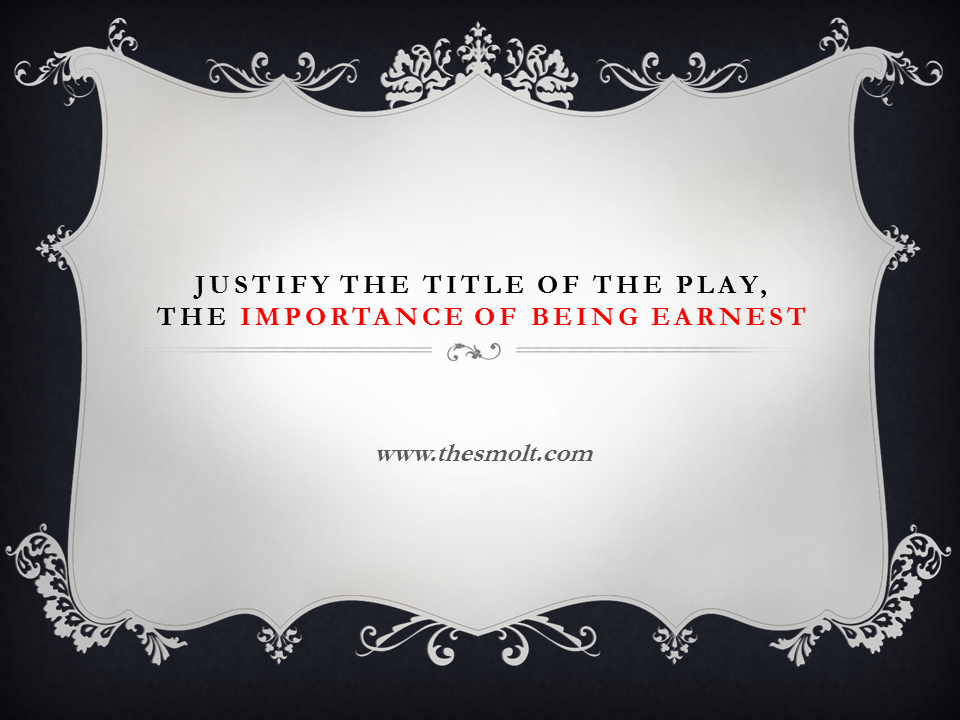