In Mystery and Miracle Plays, incidents from the Bible and episodes from the Lives of the Saints were turned into dramas and these were performed on the occasion of religious festivals, which under the Catholic Church were as numerous as in the Hindu Calendar.

The Mystery Plays began with a simple pageant of the Christmas or Easter story in the church itself. These plays were first written and performed by the clergy within the precincts of the Church. Mystery Miracle and Morality plays

But as laymen gradually began to take a greater interest in those performances, non-religious themes, gradually found a place in them and these dramatic representations gradually assumed a secular aspect. Mystery Miracle and Morality plays

Miracle plays are medieval dramatic presentations of the Mireles of Christian saints. They developed from the earlier Biblical mystery plays and the term “Miracle’ is some-times use to include both. The English mystery plays have been preserved in four important cycles.

“The Townley, York, Chester, and Coventry plays, named after the towns where they were enacted. The line between the Mysteries and the miracles which dealt with the miracles of Christen saints is not always clearly drawn. and the mysteries are sometimes included in the term Miracle Plays’.

In this type of early drama, the characters are personifications of abstract qualities. The drama is based on moral allegory. It implied a greater severance (separation) from the religious themes of the mystery and miracle plays and afforded a large scope for the exercise of the creative imagination.

The Devil and his attendant, the Vice, Friendship, Beauty. Wealth, Strength, and other abstract qualities are prominent characters in most of the Moralities. One of the earliest Morality plays is the Castle of Perseverance.

The best-known morality plays belong to the earlier half of the sixteenth century, These depict the spiritual struggles of man Human life is treated as a battle-ground for the virtues and vices until they are led to the judgment-seat of God.

Everyman asks his friends to accompany him, but all his companion’s Friendship, Relationship, Wealth, Beauty, strength, Worldly Goods and the five Senses abandon him. Only Good Deeds remain true to him. The central figure, Everyman, is symbolic of humanity.

This play enjoyed great popularity. Morality play makes a valuable contribution to the growth of drama. Firstly, it showed the way to plot-construction based on character. Secondly, characters, though abstractions, are given human qualities. The most impressive contribution is that of the Devil accompanied by Vice.

Hello, My Dear student, I hope this article helps you. So, please don’t forget to give your Respectful Feedback. 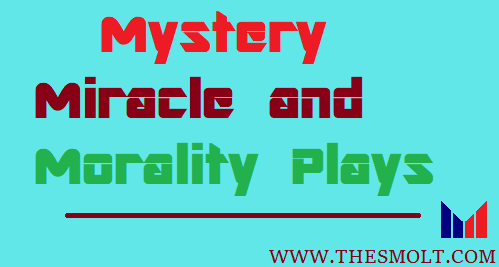