Ans. David Herbert Lawrence was the leading novelist during the modern age in the English language and literature. Short note on D. H. Lawrence

It was he who had left tremendous effects on the English language and literature in a vivid manner. He had observed human sentiments and tender feelings.

He was a great observer and original writer of his time. He had brought a new kind of poetic imagination to English fiction. He was a passionate puritan and his satirical and sexual ideas were high and lofty.

He believed that there can be no satisfying union on the physical surface alone. In his eyes, once a man established a full dynamic communication at the deeper and higher center with a woman, this can never be broken.

The important novels of Lawrence are- Trespassers’, The Rainbow’, Sons and Lovers’, ‘Women in Love’, ‘Aeron’s Rod’, and Lady Chatterley’s Lover’. D. H. Lawrence resents man’s subjection to women, The sense of revolution against man’s Killing civilization regarding the modern civilization.

Lawrence believes that man has cut himself from the white Peacock’, ‘The living cosmos. Lawrence was a rebel against the existing systems of society.

He made important contributions to the form of English novels by bringing new subject matter and by giving instantaneous observation. He was interested in the workings of the elemental life impulse.

Lawrence was in a true sense a prolific writer and a great artist. In The White Peacock (1911); Lawrence presented the conflict between man and woman.

Lawrence explores the relations between man and woman. “Sons and Lovers’ is an autobiographical novel and presents a deep relationship between son and mother.
In this novel, love and hatred have been presented with a naked intensity.

The Rainbow’ (1915) is the leading novel by D. H. Lawrence in which the novelist again concentrated his attention on the conflicts between man and woman.

In Woman in Love’, Lawrence expounded with the greater elaboration of his views upon human life. In this novel, there is a revolt against the machine age and the conflict between the owners and the miners are depicted.

In Aeron’s Rod (1922), the maturity of perception and flowering of stylistic qualities of Lawrence is exhibited. The Italian atmosphere is presented with vividness and intense fervor.

In ‘Kangaroo’ (1923), Lawrence depicted the Australian background with striking vividness. In ‘The Plumed Serpent’ (1926), Lawrence concentrated his attention on Mexican life and presented it with the same vividness and intensity.

In ‘Lady Chatterley’s Lover’ (1929), the novelist exhibited sex offensive and open use of licentious life. It is a novel in which sexual experiences are handled with physical wealth in detail.

Lawrence was a cynosure in the sky of the English novel.
He achieved great distinction as a great novelist in the English language and literature. Short note on D. H. Lawrence 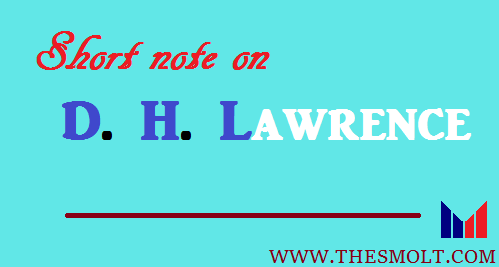