Ans. T.S. Eliot (1888-1965) was the leading poet, critic, playwright, thinker, and scholar during Modern age in English language and literature. He had influenced modern poetry more than any other poet of the 20th Century. Write a short note on T. S. Eliot

He was quite aware of the present and the baffling problems which are faced by human beings in modern time, He combined in himself strange and opposite characteristics. He was a traditionalist rooted in classicism as well as an innovator of a new style of poetry.

He was a stern realist acutely conscious of modern civilization and its manifold problems as well as a visionary who looked at life beyond the limits of time and space.

The poems of his early period as, ‘The Lovesong of J. Alfred Prufrock’ express the disillusions irony and disgust of the modern world which is trivial, sordid and empty. In his greatest poem, “The Waste Land; the poet surveys the desolate scene of the modern world with a reaching gaze.

As a matter of fact, Eliot was a man of many-sided personality and was a great social philosopher, He made life but also of mankind as a whole. The soul of man finds itself in horror and loneliness in The Waste Land’ unless it is redeemed by courage and faith, Eliot had a spiritual approach to life which was dominated by science and materialism.

He expressed his ideas and feelings in a language that is devoid of all superfluous ornamentation and is capable of conveying the bewildering and terrifying aspects of modern life. He did utmost to make his age conscious of itself and aware of the dangers of interest in modern civilization.

Eliot attempted to find a new medium of a solution and he also sought to extend the range of poetic language by introducing words used in common speech. The later poems of Eliot were compacted with higher feelings and experiences. Among them, ‘Burnt Norton; ‘East Coker’, “The Dry Salvages’, “Little Gidding’, are of a high order.

Eliot’s poetry is of intellectual character with subtle deliberation. It is loaded with learning and is heavy with thought. The fragrance of mammoth scholarship is ever represented between the lines of his poetic works. Eliot is recalled as one of the greatest innovators of modem poetry.

He has suffused new sincerity and spiritual depth to modern English poetry. Eliot devoted his literary talent to poetic drama and literary eroticism. There existed the awareness of religious truth in the creations of Eliot. Like great imagists, he was always concrete and his pictures wee mainly based on subtle and accurate observations.

In fact, Eliot showed a particular fondness for the metaphysical conceit with its blend of emotion and intellect. .S. Eliot also wrote many important plays like “Cocktail Party’, “Confidential clerk”, “Murder in the cathedral, ‘Swannery Agonists, “The Rock’, and The Family Reunion’.

All these plays contain emotional development and interest in religious matters. Eliot was a superb personality of his time and he devoted his talent in dramatic intensity and factual arguments for the rapid progress of literature in the modern age. He is aptly recalled as a scintillating start in the walking of English literature of the modern period. Write a short note on T. S. Eliot 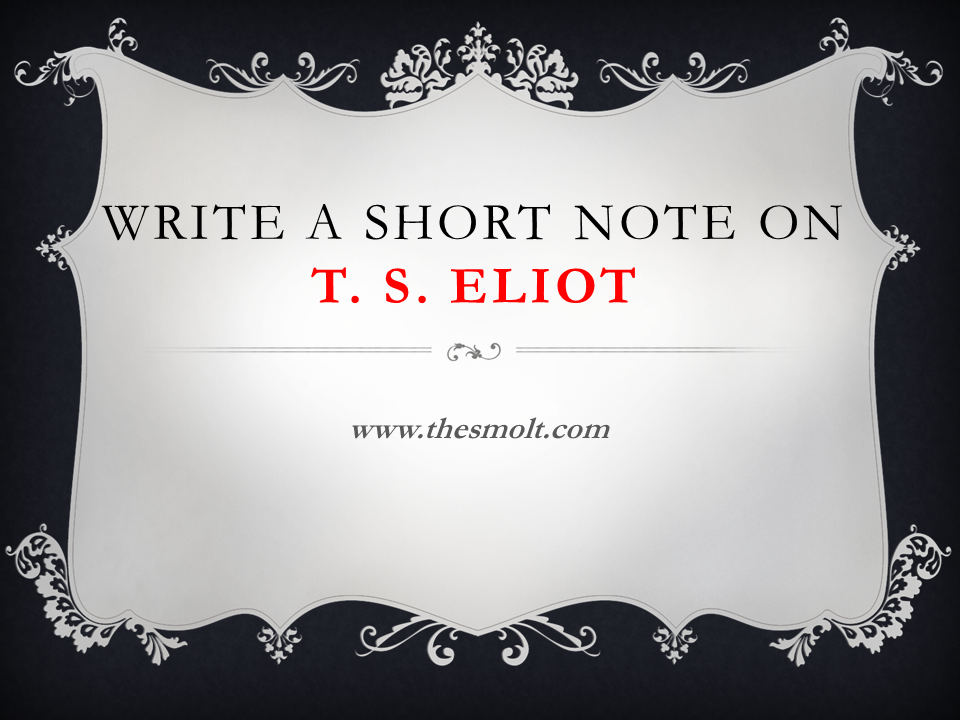 Hello, my dear student, I hope you learn something different here. So please don’t forget to give us your valuable feedback.  ON Write a short note on T. S. Eliot