Ans:- A classic is a work of art that pleases all and pleases always. Such work is appreciated and approved by the readers and critics of all the ages. A classic possesses the qualities exhibited by the greatest literary works of the post. The Old Man and Sea’s is a classic

These qualities are estimated in terms of form as well as spirit. In other words, we have to see whether the work possesses the same form which the literature of the past possessed and whether it appropriates to the spirit of that great literature of the part.

tt The Old Man and Sea’s is a classic

Read more from English 2nd Year (click) Seen from this point of view The Old Marn And The Sea is certainly a classic. It is surely a great work of fiction in point of its structure, its vision of life, its character- portrayal, its realism, and its style. Let us analyze its qualities separately. This novel is compact, clean, and neatly organized.

The story is swiftly told without any long background or interruption. There is nothing superfluous. Every detail tells the story. It is the story of the old Cuban fisherman, named Santiago, who after continuous failure for eighty-four days, decides to venture far out into the ocean. Anyhow he succeeds in looking a marlin bigger than he had ever seen in his life.

After an ordeal lasting two days, he manages to harpoon it and then lash it to his boat. However, before he can bring it to his home, a group of ruthless sharks attack his catch and get their farangs into the sources of the marlin and despite Santiago’s vigorous attempts to save the marlin, the sharks eat away must of the flesh of the marlin, leaving hardly anything except its skeleton. The Old Man and Sea’s is a classic

Santiagos attempts thus turns to nothing and he returns empty-handed The novel is not divided into chapters. But distinctly the book can be studied in four parts.

Apparently the novel is the story of the old man’s adventure on the sea and his victory over the marlin, but his defeat at the hands of the preying sharks. Symbolically, the novel deals with the theme of the undefeated man, or the man facing the heavy odds of life and winning a moral victory ever through defeated in a physical or material sense.

Hemingway has made deft use of imagery in the form of the boy, the Sharks, the lions, Di- Maggio, etc. The imagery of the Crucifixion is also used by the novelist to heighten the heroic effect in the novel. Thus in this novel, Hemingway has been also to show himself a skilled craftsman.

The Old Man and the Sea is a novel of affirmation of the supreme human values like courage, endurance, humility, patience, and self-realization. This novel marks a departure from Hemingway’s earlier work which is characterized by disillusionment and negation. The Old Man and Sea’s is a classic

It constitutes an epic metaphor of man’s struggle against the overwhelming and impossible odds of life. This struggle inevitably plunges a man into the moral questions of right a wrong, but in the face of the struggle itself, even these eternally important questions pale into insignificance.

In this aspect, this novel is different from his other novels. Santiago is not a permanently ‘ Wounded’ hero as was Jake Barnes in The Sun Also Rises and Lieutenant Henry in a farewell to Arms.

In fact, this novel is reminiscent of great Greek epics and trajectories in which men fight against odds and finally win a moral victory, even though on the material plane their struggle may prove disastrous.

There are various interpretations of the theme and the vision of life as reflected in this novel. According to one view, the novel has as its theme of social concern and mutual interdependence.

No doubt, Santiago has been presented as a lovely old man but even in his onliners he drains support and comfort from his thoughts of the boy Manolin, he is in a way a dependent on the restaurant owner and the wine shopowner.

Even the baseball champion. Di- Maggio provides the old man with essential vigor and support. Thus the story can be studied as a document of interdependence and fellow feeling. Hemingway has been regarded as an originator of a new style.

As an artist he has practiced restraint, Judicious selection and has undertaken to trim nad pruning of superfluous material, His interest in truth has led him to enshrine the external details,’ the sense of fact, the sense of place and the sense of the Scene.

” He has also attempted to describe the inner process of inaccurate words. The Old Man and Sea’s is a classic 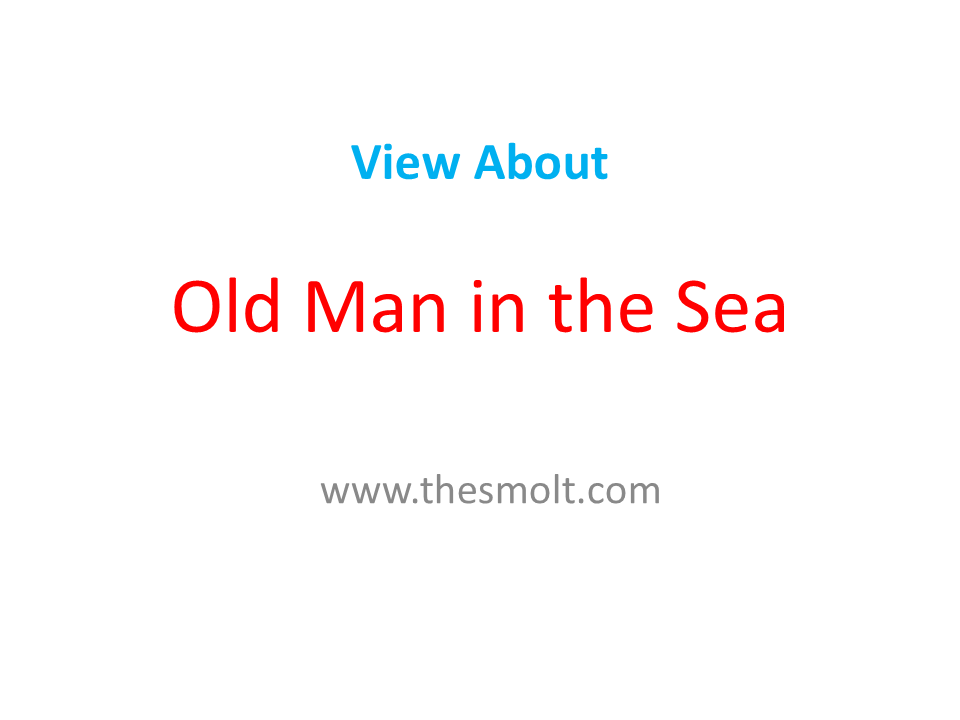 The Old Man and Sea

Note:- If you want to Download This article’s in PDF form, then simply go (Top or Bottom of) Right corner and click on the PRINT icon, and it’s saved as a PDF of The Old Man and Sea’s is a classic

Best Regards The Old Man and Sea’s is a classic, Kindly we request to you after Installing This Application, Please Don’t forget to give your feedback.