Ans. No two speakers of a language speak in the same way, and a language does not exactly correspond with the speech of anyone speaker of the language. Rise of standard English

Read more from 1st Year (click) It may, therefore, seem that a language is a rather unreal abstraction, like the ‘average man’. However, the lack of exact identity of speech-sounds is unimportant, since no ear can distinguish them with perfect accuracy.

What is known as standard English

All that is necessary is that the speech sounds used by different speakers of a language in pronouncing a particular word shall resemble each other so closely that most hearers think that the sounds are identical.

A similar test may be used to define Standard English. Standard English is that form of English speech which so closely resembles the average pronunciation of most educated speakers as to seem identical with it to a hearer with a reasonably good ear.

This definition abounds in expression that can not be exactly measured, and those who are made unhappy by such expression would be wise to avoid the use of a term like Standard English altogether.

Speakers whose deviations for Standard English are considerable are said to speak a dialect, but it is well to remember that Standard English itself is a dialect that has acquired greater importance than the other English dialects for reasons which are in the main non-linguistic.

Dialects are of two kinds. They may be regional or they may depend on the social class, to which the speaker belongs. The two kinds of dialects are not mutually exclusive, and some linguistic features are characteristic of both regional and class dialects.

In the course of the history of the English language, regional dialects have become less important as more and more speakers have learned to speak Standard English but class-dialects have, for good or ill, become more important.

Regional dialects are important for the student of the history of a language because they often preserve old forms that have been lost in the standard language.

What do you mean by Standard English

Many words that are obsolete in Standard English are still in frequent use in dialects and dialects preserve from unaffected by sound changes that have taken place in the Standard language.

The rise of standard English led to a decline in the literary importance of the various English regional dialects, although they have continued to be used to the present day as spoken dialects and, to a lesser extent, for literary works.

The only dialect apart from Standard English, which has remained in constant literary use since the Middle English period is Lowland Scots, The London English which formed the basis of standard English was in the main an East Midland dialect, but it incorporated a few forms from other dialects.

The chief reason for the importance of the East Midland dialect in the development of Standard English is that it was the dialect of London and the court, but the existence of the Universities of Oxford and Cambridge in or near that dialect area undoubtedly increased its importance.

Write a note on the rise of Standard English

Throughout the history of English, there has been a contest between the forces of standardization and the forces of localization, at both the written and the spoken levels.

The appearance of the first substantial English dictionaries in the eighteenth century was a move towards written standardization. It was Victorian England that realized the idea of the King’s English or the Queen’s English, a spoken standard to which the lesser breeds could aspire. 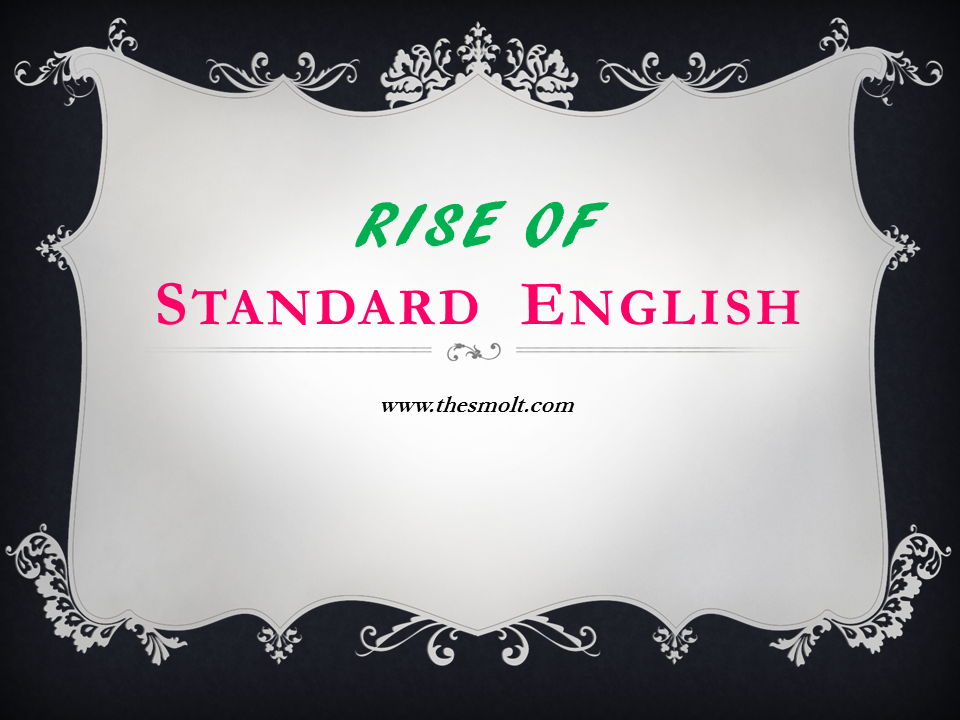