Ans. The nobility of Duncan as a king is home witness to by Macbeth himself: “Besides’ this Duncan Hath borne his faculties so meek hath been So clear in his great office, that his virtues Will placed like angles, trumpet-Longue’d against The deep damnation of his talking-off” The historical Ducan was a weak and in component ruler but Shakespeare points him as worthy of all veneration and loyalty, for his subject. In any case, he bears an honorable and virtuous character. Character sketch of Duncan

He is gracious in his dealing with his subjects, and is, loved by them. He is of an amiable temperament and is quick to acknowledge and reward services to the state. He is trustful and unsuspecting. He has been already betrayed by one in whom he placed an absolute trust; yet he does not hesitate to place his life, of his own accord, in the hands of another favorite.

It has to be said that he was a man born out of his proper, age into a century of intrigue and violence he is too peaceful a man to govern a country in which turbulence is so rife. He is nature too refined to adopt those strong measures which are needed to keep to check the unruly passions and ambitions of his nobles. Instead of being, as every king ought to be, a student of human character, he is a lover of nature and natural beauties. Character sketch of Duncan

Character of Duncan in Macbeth

He believes that the conferring of honors on all who deserve them is but a fitting pendant to the nomination of Malcolm as heir-apparent; he cannot even guess that there are other aspirants to the throne. He fails to penetrate the mask of Lady Macbeth’s treachery. He scents nothing wrong in Macbeth’s absence from the super-table. Character sketch of Duncan

Sketch the character of Duncan

He even enjoys himself heartily, and disturbed presents all round. It is this failure to understand the world, this hermit-like saintliness of him, which costs him his life. He is not a practical man. Character sketch of Duncan 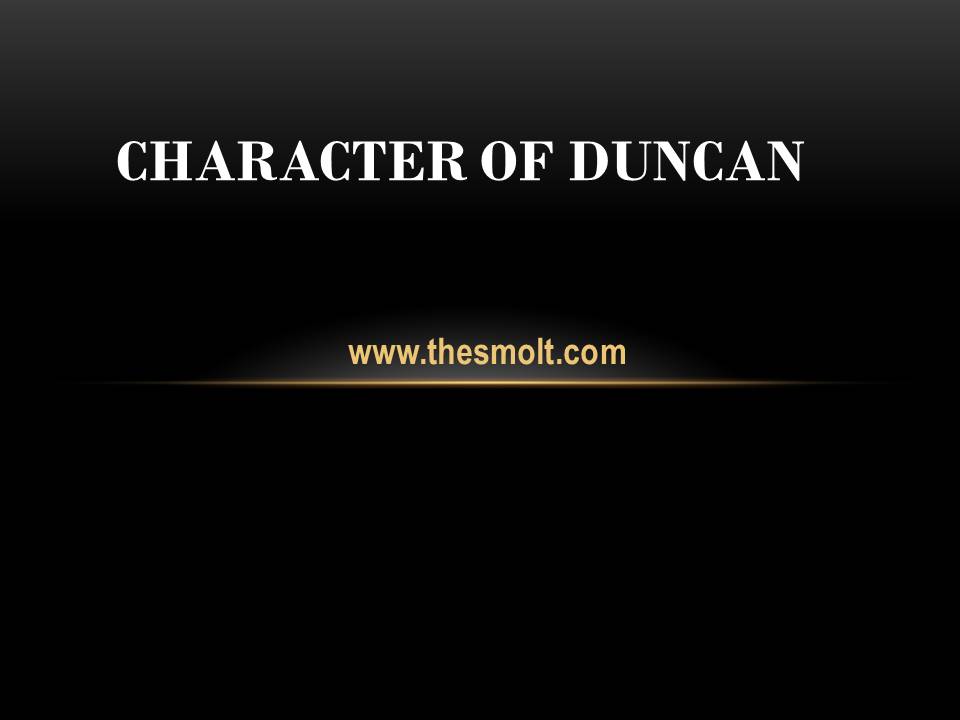