Ans. Sir Toby is the arch-piotter and fun-maker in Twelfth Night. Though a drunken reveler and a disorderly never-do-well, ‘as his name indicates, and, as such, is not the sort of person whom we should care to have a friend. Sir toby character in twelfth night

Sir Toby nevertheless endears himself to our hearts by his irrepressible and genial good humor, a keen sense of fun, his original mind, his desire to get the most of his life by hook or by crook. Shakespeare’s faculty of presenting h.is characters before our eyes in such a 111anner that we take the most charitable view of them is indeed unique.

Sir Toby is a’çase In point. “He is sly, impudent, coarse, diss61ute and bullying, and yet- we can hardly help liking him. He is a jovial toper with an ingrained capacity for appreciating the senses of humor of a situation by his- wit, humor and raillery, his natural skill in talking intentional nonsense and an aptitude for, appropriate and almost endless punning. Sir toby character in twelfth night

He is no coward but à brave man who is ready to fight when necessary. He fights with Antonio when the latter offers himself to fight for Viola, whom he takes for Sebastian. When later, Sebastian proves himself more than a match for Sir Andrew, Sir Toby is more than willing to take the place of the beaten knight”-(IV. I). When he is wounded, with a bloody coxcomb, he does not whine a Sir Andrew did, and wish he were at home;

he takes his wounds as a matter of course, replying to the Duke’s question: “How isn’t with you?” Tritan which is that Malvolio affects Puritanic That’s all one: has hurt me, and there’s the end don’t.”- (V.i.) He is the leader of the ‘roistering’ crew of resellers and fun makers, in whom we notice just a faint resemblance of Falstaff. The resemblance, in fact, lies more in possession of their sparkling wit and good-humored raillery and’ a taste for ‘canary’. but Falstaff is never drunk, while Sir Toby is never sober. He is a boisterous drunkard.

He is ready to drink a health to his niece as long as there is a passage in his throat and drinks available in Illyria. His opening words.,”l am sure care is an enemy office” may be regarded as the motto of his life. He sees no sense in Olivia’s fruitless grief for her dead brother. He keeps “ill hours, wastes his time, quaffing and drinking” with a foolish knight whom he makes the butt of his wit at the same time he fleeces him of his money.

He is either drunk or half-drunk through all the action of the play and. measures other peoples’ merits by their powers of drinking. It is left to Sir Toby to devise the scheme of punishment of Malvolio, although the original suggestion of the love-letter came from Maria. Sir Toby shuts Malvolio up in a dark-room. He then arranges to send the Clown in the disguise of a priest of Malvolio’s cell. The Clown opens forthwith a debate with the steward in order to test his protestations of sanity.

Again, the idea of the duel between Sir Andrew and Viola comes from Sir Toby. When Sir Andrew has been a witness to the second meeting between Cesario and Olivia, he becomes jealous of the favor shown by the Countess to the page. So he feels his proposed marriage to he -hopeless and proposes to his friend Sir Toby, that he would not stay at Olivia’s house a jot longer’ 5ir Toby. Sir Toby.finds that if his friend goes away, there would be no-one left to finance him.

So he immediately devises his plan for a due] between Sir Andrew and Cesario. Sir Toby says that by the v.ery act of showing favor to Cesario, Olivia is indirectly inviting Sir Andrew to approach her with a view to love. This is the starting point of the highly fantastic due] between a timid girl (Viola) and a coward (Sir Andrew). Sir Topy, is thus, the chief source of comedy in Twelfth Night. He fools money out of his friend, Sir Andrew, who looks upon hirn as a very glass of fashion.

He takes a somewhat disinterested pleasure in practical jokes. He is a believer in the philosophy .of toleration which bids men live and let jive’ as he asks Malvolio. “Dost thou think because of thou art virtuous, there shall be no more cakes and ale?- (11. i), in order to justify his riotous manner of living. But Malvolio’srebuke to the revelers is sensible and justified when we consider the unprotected condition of his mistress in a house of mourning. Sir toby character in twelfth night

“Sir Toby is a most genuine character, one given to strong potations and boisterous merriment; but with a humor about him perfectly irresistible. His abandon to the instant opportunity of laughing at and with others is something so thoroughly English, that we are not surprised that the poet gave him an English name. Sir toby character in twelfth night

Sketch the character of Sir Toby

And, like all genuine humorists, Sir Toby mUst have his butt. What a trio is presented in that glorious scene of the second Act there -the two knights and the-Clown make the welkin dance- the humorist, the fool and the philosopher.”-(Knight). Sir toby character in twelfth night 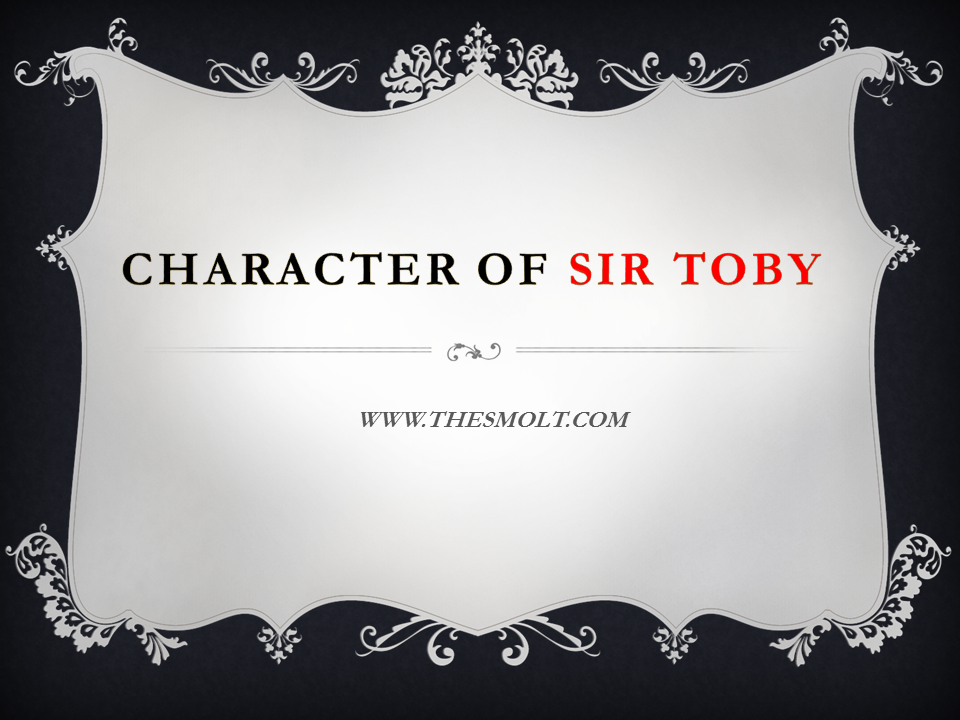