Sketch the character of Maria.

Ans. Maria is the waiting-maid of Olivia. “The queen of the lower world and the arch-foe of Malvolio.” She is sharp, quick-witted, vivacious and smart, she is described as “typically appropriate to a comedy of intrigue, and moves in it as in her element.” Intrigue is needed to bring out the silent points of such a character. She is the very embodiment of the spirit of mischief. Sketch the character of Maria

“Her great pleasure in life is to see others discomfited, and the pleasure is intensified if she herself may be the cause of the discomfiture. She un marks the vanity of Malvolio, reveals the depths of the ignorance and Polly of Sir Andrew, and. acts as a spur to the boisterous humor of Sir Toby or the wit of the clown. She has wonderful insight as well as the sharpness of speech.

By her insight into the character of Malvolio, she knows his weakness, viz., his lack of humor and vanity, and is successful as a plotter of cunning and facked love- letter purported to have been written by Olivia but really by her. Sketch the character of Maria

“She has read Malvolia through and through; she knows him without and within, and she never speaks of him, but that her speech touches the very pith of the theme; as when she describes him to be one “that cons state without book and utters it by great swarths; the best persuaded of himself, so crammed as he thinks, with excellence that it is his ground of faith that all that looks on him, love him”. She is a small stature.

“The smallest insects are those which are apt to trouble us most, and Maria pert and saucy and roguish not frequently reminds us of the nimble insects whose sole purpose in living seems to be to annoy mankind.” There are several references to her short stature. Viola ironically speaks of her as Olivia’s giant. Sir Toby says. “Good-night, Penthesilea” and again, “Here comes little villain” and “Here comes the youngest wren of mine.”

She is as good as her word and carries out every item of her program. Then, with that gusto does she watch the success of her practical joke! She does him “like his murderer”. With what infectious merriment she communicates to hed partners the plot in the successful progress of its development. “Sports royal” she calls it and renders it such to everyone except  Malvolio himself. Sketch the character of Maria

Who is Maria in twelfth night

She taunts him, and torments him, and goods him to frenzy without even the smallest feeling of remorse. Maria is clever enough to adapt to all companies, high or low. When Viola enters the house of Olivia for the first meeting and announces that she is to deliver to the lady of the house her prepared speech, she is in doubt as to which Lady Olivia is.

This proves that she is refined enough in appearance and well enough dressed to make it doubtful to Viola. She is also well enough educated to be able to write a sweet Roman hand and so compose an excellent letter. According, to Feste she is ‘a noble gull-Catches: Her drafting of the letter shows that she is adept in reading character and touching all the weak points of Malvolia’s character. Sketch the character of Maria 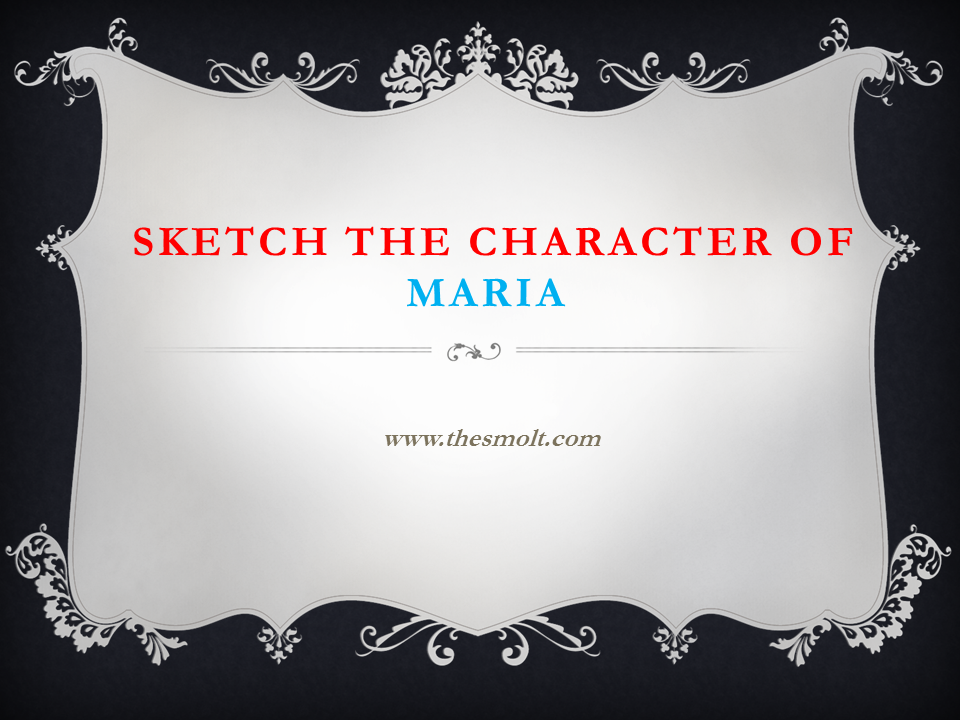