Ans. Jack worthing is the leading male character of the play, The Importance of Being Earnest’, sketched by Oscar Wilde, the great playwright during the Victorian period in the English language and literature. He is the cynosure of the play and the rest characters revolve around him like planets. Character Sketch

He is robust, stiff and stodgy in personality. By profession, he is a Libera, unionist and is prosperous. He is in intimate terms with Algernon and does not share in trifling affairs. He stops to fabricate to justify his jaunts to London. He reveals the secret of his fictitious identity as earnest only to Algernon. By disposition, he is very serious.Character Sketch

Being a guardian of Cecily, Jack finds difficult to bè frivolously. From the inception of the play, he complains of his toothache. He is nervous by temperament and he does not gather the courage to propose directly to Gwendolen. He is in habit of beating about the bush and is ashamed of his London jaunts. He is indecisive in his actions and allows Algernon to remain at the Manor House.

He leads a dual life and he is the local justice of the peace. He is looked upon in the country as a man with many troubles. His conversation is out of merriment and he roams in constant anxiety about his brother. In town, he gains confidence within himself. His gravity of demeanor is comparatively young in respect to his age. The news of his brother’s death is published by him.

In his mind he considers himself personified and he tries to exhibit his high moral tone on all subjects. Jack is a man of outspoken nature and he does not feel shyness of his mysterious birth to Lady Bracknell. Even he discloses his previous life and the duty performed by foster-father, Thomas Cardew. Even his name worthing signifies the name of a station. Even he is ready to pocket the insults of Lady Bracknell for the sake of the love of Gwendolen. Character Sketch

Sketch the character of Jack Worthing

He is submissive to Lady Bracknell. He makes rapid upliftment in life due to his efforts, He is very sincere and steadfast in the game of love and faces the stiff opposition of Lady Bracknell. He undertakes the risk of christening himself with the help of his rector Chasuble. He bears the arrogance of Lady Bracknell and the oddities and excesses of Algernon.

In the last phase of the play, he marries Gwendolen as earnest, a blue-blooded nephew of Lady Bracknell. Jack is in true sense a man of an active approach. His thoughts and understanding are of a high order, Like Durian. Gray, he keeps dual identities. His attempt to baptize himself reduced to absurdity.

He even finds himself, forced to kill his imaginary brother Emel, which is harmless and a parody of Arthur’s crime. Jack is the scintillating character. His actions are loaded with significant understanding. The playwright Oscar Wilde has delineated his character in a vivid, explicit, exalted and consummate manner. Character Sketch 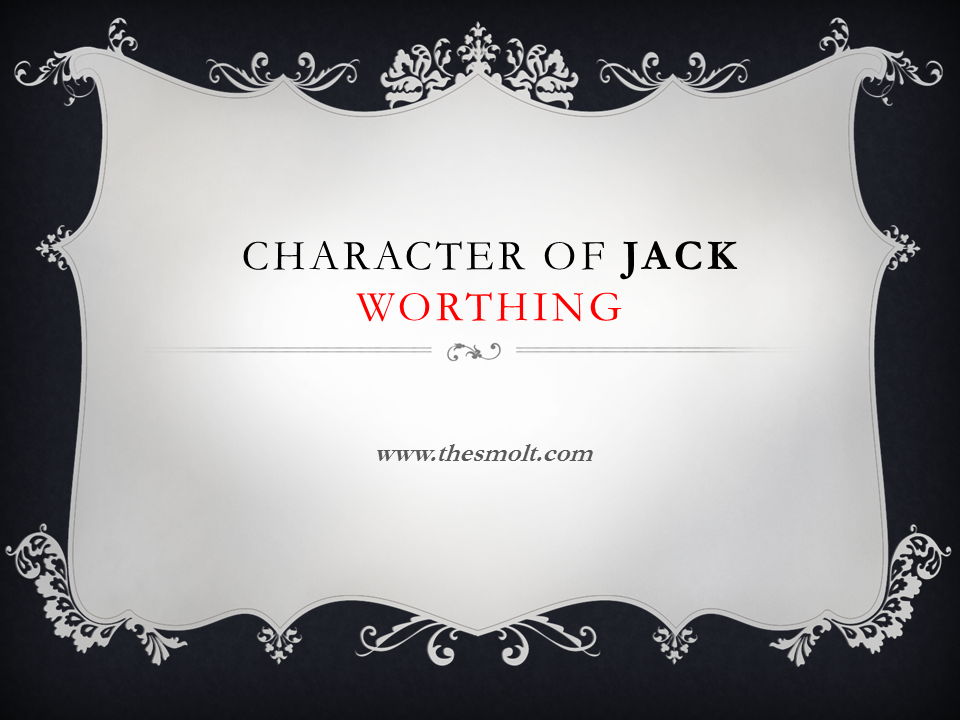