Hello, a student here you will learn about the “Number Pattern Program in C Using For(): loop I hope this will helps you A lot. 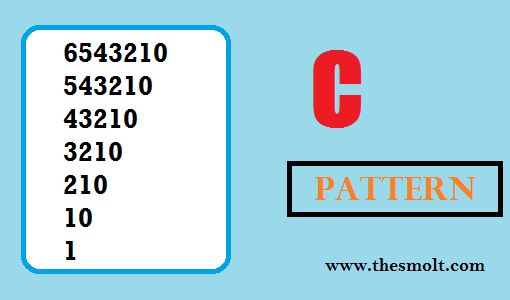 Pattern program in C with explanation

Main Point for This Program?

#include:- That we know in every program we are using #include that is Preprocessor.

<stdio.h> :- It is a Header File whose extension is .h ‘or’ Standard Input/Output.

<conio.h> :- Conio stands for Console Input/Output. It is also a header file, we use it for Clear Output.

void main():- Main is a function and It executes a C program. Only one main function must be present in a C program file.

{ }:- we use it to separate the Particular Block.

Int (Datatype):- It is a Datatype, which storage capacity is 2 Bytes.

I,C (Variable):- Variable must be declared before using then in the declaration portion of the C program. Variable can be declared as Local ‘or’ Global Variables.
Ex. Var1,Var2….VarN; or Int a,b,c; (Here you can also put value in these Variable like Int a,b,c=5)

; (Semicolon):- It is also an important part of every C program. Because in the C program every statement is terminated by Semicolon.

Note:- Here escape sequence ‘/n’ is used to move the cursor in the output window.

Q. Why use clrscr();?
Ans:- clrscr(); stands for Clear Screen, in every C program we can use this function for clear the output screen. we attach it bottom of <Data type section> & top of printf(); or scanf(); .

Break; :- Break keyword that is used to terminate the execution of Switch-Case statement as well as any type of loop.

Why use getch(); in c program?
Ans:-It is an Input statement function, which is used to input data from the Keyboard/File and store the supplied data into variables is called Input statement/Function. In C program if you will use header file as <conio.h> then you have to necessary to use getch(); or return 0; if any case you don’t use this, then our compiler can not understand what to do, Because of the header file <conio.h>, conio stands for Console Input/Output so the C compiler will be confused.

Hello Dear, I hope you will enjoy this Article, Pattern Program in C if you want to learn more Briefly then you can Read this Article Visit again.