In Pride and Prejudice, with the possible exception of Kitty and Mary, there is no character and no event, which may be called superfluous or which does not contribute to the development of the story.

Read more from 2nd Year (click) Even the comic Proposal to Elizabeth or Mr. Collin’s has its place and significance. It serves to highlight the character of the heroine and shows her in a favorable light as compared with her friend Charlotte Lucas. The events follow each other logically and inevitably.

The story opens at Longfourn. The arrival of Mr. Bingley at Netherfield Park is an important event because of the matrimonial intention of the Bennet family, and also because it is with him that the hero Darcy makes his appearance.

Quite naturally, there is a ball at Netherfield Park which makes stage in the development of the plot, The plot develops through the conflict between Darcy and Elizabeth, the pride of one and the prejudice of the other.

Jane Austen shows great skill in the handling of events which now follow in quick succession, resulting in the depending of Elizabeth’s prejudice and the awakening of Darcy’s love for her.

The conflict between pride and prejudice weakens as Darcy makes his proposal to Elizabeth at Hunsford. However, as this proposal is made an insulting tone, it is at once rejected. From this time onward up to the end, Jane Austen is at her best and Justifies the praise of WL. Pride and Prejudice by Jane Austen.

The story develops through conflict between their respective pride and prejudice and ends with the reversal of their attitudes. In the manner of a drama, ” the action is carried forward through short scenes in dialogue ” ( Watter Scott ) Character also is developed through dialogue instead of description or analysis.

In these novels nothing very dramatic happens; everything is simple, straightforward, and controlled. But the dialogues are quite brilliant. The floats of Jane Austen’s novels are compound and not simple.

In each of them are several pairs of lovers. Her novel consists of a number of subs. Plots, digressions, and episodes.

Thus in pride and prejudice, we have at least:-

( a ) The main plot consisting of the love story of Decay and Elizabeth,

The novelist has woven together all these threads with great skill. The subplots besides providing a touch of tragedy to the story also serve as a foil to the main plot. Jane and Bingley are more passive lovers as contrasted with the active nature of Elizabeth and Darcy.

Write an essay on Jane Austen’s skill in plot – construction

Bingley’s sudden departure for London from Netherfield serves to heighten Elizabeth’s prejudice towards Darcy, for she regards him as being responsible for the misery of her sister. At the beginning of the subplot holds the front of the state, but gradually it is pushed into the background and the main story is seen in its proper perspective.

Lydia – Wickham episode also adds the element of melodrama and sensation. It also highlights the essential nobility of Darcy and thus serves to dispel the prejudice of Elizabeth. It serves to increase the suspense of the story.

The comic proposal of Collins imparts dramatic relief and variety of the story ” and brings out the prudent and noble nature of Elizabeth by contrast with the materialistic nature of her friend.

” This marriage with charlotte results in Elizabeth’s visit to Hunsford where she comes to know more about Darcy and consequently there is a weakening of her prejudice towards him.

Plot Structure of Pride and Prejudice by Jane Austen

Thus there are no loose ends, all the parts have been well fused into a single compact whole. Jane Austen’s novels contain very little action and what every action there is it is trivial and commonplace.

It consists merely of little visits shopping expeditions, wedding dinners and tea – parties, dances card playing, etc. Such trivial and insignificant actions go to make up the plot of her novels. But such is her exquisite touch.

An important piece of information is conveyed in the dialogue or a new character introduced. ” Her novels are novels of common and not of action. They are the apotheosis of the commonplace.

The plots of Jane Austen’s may not be highly original or ingenious, but they are highly artistic. No other writer of function has ever achieved such great results by such insignificant means, none other has, upon material so severely limited, expended such beauty ingenuity and precision of workmanship.

Her manuscripts which are profusely connected show that she worked on her novels very slowly and with inexhaustible patience.

Cross has rightly observed that no novelist since fielding has been a master of the structure as Jane Austen was.

The Plot of Pride & Prejudice. 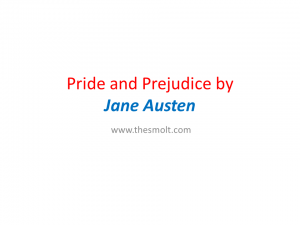 Note:- If you want to Download This article’s in PDF form, then simply go (Top or Bottom of) Right corner and click on the PRINT icon, and it’s saved as a PDF of Pride and Prejudice by Jane Austen

Best Regards Pride and Prejudice by Jane Austen, Kindly we request to you after Installing This Application, Please Don’t forget to give your feedback.