Ans:- Bring out the Social Moral Religious significance of Hemingway

The religious significance in the old man and the sea

Santiago does not seem to have prevented belief in the existence of a benevolent God. Yet he prays to God on a few occasions in the novel. In an orthodox sense, Santiago does not believe in religion, but he is not irreligious.

He promises to say ten ‘Our Father’s and ten Hail Marys’ If he succeeds in catching the great martin, he promises to make a pilgrimage to the Virgin de Cobre, Santago prays, Hail Mary, full of Grace the Lord is with Thee. Blesses art thou among women and blessed is the fruit of thy womb, Jesus’.

It is true that Santiago makes these prayers mechanically but the significance of these. Prayers in the face of his ordeals can not be underestimated. Another aspect of Santiago’s religiosity can be seen in his mental trouble at his own action of catching and killing the fish.

He fells troubled by the thought that he may have committed a sin and he comes to the conclusion that it was no sin because he loved the Marlin when it was alive and even afterward. The feeling of guilt is heavy upon him and he says, ‘Perhaps it was a sin to kill the fish… Do not think about sin.

It is much too late for that and there are people who are paid to do it. Let them think about it.” Santiago’s words are enough to stir the religious sentiments of any conscientious reader. This utterance can acquire wider implications for a reader who is reflective, pious, and religious by nature and temperament. Bring out the Social Moral Religious significance of Hemingway

The crucifixion imagery also lands a religious character in the novel. Santiago’s sufferings are depicted in terms of the suffering of Jesus Christ. We are told about the old man’s feeling as if nails had been driven through his hands into the wood beneath. His cry ‘Ay’ is equally significant.

We also read about his carrying the most on his back and struggling up the hill under the heavy burden and in the end, we are told that the old man has fallen asleep “with his arms out straight and the palms of his hands up.”

All these instances remind us of the story of the martyrdom of Lord Jesus Christ. Thus, The Old Man and the Sea is quite significant from the social, moral, and religious points of view.

The social significance in the old man and the sea

The novel has a great social significance Some critics find The Old Mạn and the Sea as the climax of Heming way’s search for disengagement from the social world and total entry into the world of Nature, Heming way Exprecess his faith in the spiritual sufficiency of life, lived in itself and livéd fully.

Santiago is more or less a lonely old man who, when the story opens, has been emphasized by some critics that the first eight words of the novel viz, “He was an old man who fished alone” refer to a world in which man’s isolation is the most insistent truth when the novel begins, Santiago leaves the human world to go “far out” and “beyond all the people in the world”.

But all these views project an inadequate picture of the content and purpose of the novel. The novel is quite significant so far its social relevance is concerned. The real theme of the novel is not isolation but social inter-dependence, Santiago has been presented as a lovely figure, but he is profoundly aware of the fact that ‘no man was ever alone on the sea”.

If Santiago leaves the human world, the consciousness of society and his relationship to it are never out of his through for long. Finally, he returns to his village where he finds it pleasant “to have someone to talk to instead of speaking only to himself and to the sea.” Bring out the Social Moral Religious significance of Hemingway

Santiago remembers the boy Manolin again and again and this shows that the theme of inter-dependence is at the roof of the novel. The boy has been projected as the true companion of Santiago.

During his ordeal on the sea throughout Santaigs wishes the boy’s presence not so much for any assistance as for companionship. The old man wants nothing in the world but the company of the boy. The boy could have rubbed Santiago’s cramped hands, he could have wetted the coil. In fact, the boy “keeps him alive”.

It may be rightly asserted that the true direction of Hemingway’s thoughts and art from the beginning, and especially since 1937 had been a return to society-not in terms of any particular social doctrine, but in the board sense of human interdependence and social relations.

Undoubtedly one can notice the spiritual kinship between Santiago and Di Maggio. A recollection of Di Maggio championship and supremacy in the game of baseball also serves as a great incentive to Santiago in his ordeal.

There are certain other persons also who can be seen in association with Santiago. For example, there is the resultant owner and the wine. A shop owner who provides aid and comfort to Santiago. Thus The Old Man and the sea clearly upholds the concept of social relationship and solidarity. It is totally wrong to call this novel a story of alienation and loneliness.

The moral significance in the old man and the sea

The story of the novel is significant for its stress on what man can do and on the world as an arena where heroic deeds are possible” Santiago represents the undefeated hind in the face of all odds of life, He may have been defeated by sharks, but that won a moral victory by virtue of a heroic battle that he has fought against time. Defeat does not crush him, nor damped his spirit.

The novel brings out the essential invincibility of the human spirit. Thus the novel amply illustrates the virtue endurance and suffering. But this is not all. There are certain other virtues also which are exemplified in the story of the old man.

For example, Santigo’s love for all the creatures of the sea reveals his compassionate nature He is so fond of the flying fish on the sea that “they were his principal friends on the ocean.” Santiago feels sorry far the delicate bird. So he asks, Why did they make the brand so delicate and fine as those sea swallows when the ocean can be so cruel?

We notice that Santiago loves green turtles and hawksbills with their elegance, their speed, and their great value. About the porpoise he says; “They play and make jokes and love one another. They are our brothers like the flying fishes.” But Santiago’s compassion is more remarkable in the case of Marlin which he books and kills.

For him, the Marlin is a worthy adversary and for it, he has a certain amount of respect. He treats the marlin as a “friend’ and ‘brother, The looks the Marlin but he feels the pain of Marlin himself throughout his struggle with it. He feels extremely sorry for the fish after he has killed it. Another moral quality of the character of Santiago in his humility.

“He was too simple to wonder when he had attained humility. But he knew he had attained it and he knew it was not disgraceful and it carried no loss of true pride.” For all these virtues Santiago commands love, admiration, and respect of the readers. Bring out the Social Moral Religious significance of Hemingway

Hemingway said about symbolism in The Old Man and the Sea 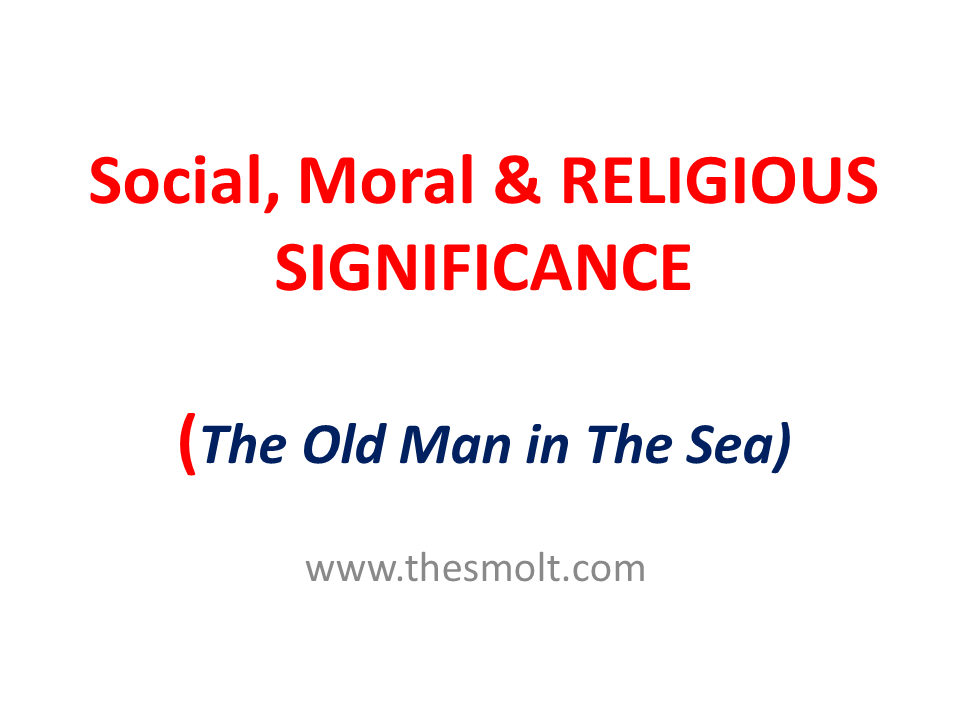 Note:- If you want to Download This article’s in PDF form, then simply go (Top or Bottom of) Right corner and click on the PRINT icon, and it’s saved as a PDF of Bring out the Social Moral Religious significance of Hemingway

Best Regards, Bring out the Social Moral Religious significance of Hemingway, Kindly we request to you after Installing This Application, Please Don’t forget to give your feedback.