Ans. Valentine is the leading male character of the play, ‘Love for Love’, composed by William Congreve, the great playwright, reviewer, thinker, human psychologist, and seer during the Restoration period in the English language and literature. He is the elder son of Sir Sampson Legend and had passionate love with Angelica. Sketch the character of Valentine

He used to lead his life lavishly and earned the displeasure of his father. He had got an obedient steward Jeremy and he had an intimate friendship with Scandal. Tattle, Ben, Foresight, Trapland, Buckram, Snap, Mrs. Flail, Jeremy are the best characters of the play and they revolve around him. Valentine had a deep interest in the study and was always absorbed in the great thoughts of great minds. He understood the fact that constant study makes a mind better in life.

He was in great debt and was unable to liquidate. Jeremy advised him to think over to pay off the debt and for that, Valentine felt ashamed. His father was a respectable person of society and own self. He wanted to make love with Angelica but he shrank due to his poverty. Even Jeremy decided to leave his servility. The scandal was close to his thoughts and understanding and he wanted to solve the pressure of debts from the head of valentine. Sketch the character of Valentine

He was a man of self-respect and he sometimes compared his standard of living with the secretaries of state or with the president of the council and generals of the army. He presented himself as a man of a liberal attitude. He had taken debt from Trapland and when he visited him, he was courteous in behavior, welcomed him and Trapland went away with an empty hand. Ben was his brother who was returning home after three years of the sea. Sketch the character of Valentine

Valentine did not get any mirth at this news because his father was going to hand over the entire property to Ben. He makes hope to get four thousand pounds from his father to liquidate his debt, By nature, he is jovial and he does not care for the consequences. He is amiable by heart and he takes interest in satires, descriptions, characters, and lampoons.

Valentine is attractive in thoughts and ideologies. He requests his father to be kind enough on his wretched condition. His shown importunity did not leave any effect on Sampson. Mrs. Tattle also adds in elevating his character. He hankers after the love of Angelica which is one-sided in effect. He also possesses a philosophical attitude in his thoughts. His father wants to get his signature on the documents in a fraudulent manner and he feigns his mental imbalance before all.

He is adept in the attitude of mankind and he mocks at the frivolity of astronomy. He is deprived of worldly pleasure due to his poverty and in the absence of employment. His shown madness saves him from many existing troubles. In the last phase of the play, he repents on his past life and whose before Angelica to be his life-partner. Valentine is the scintillating star where all the rest characters move er William Congreve has delineated his character in an explicit, vivid, lively and consummate manner. Sketch the character of Valentine 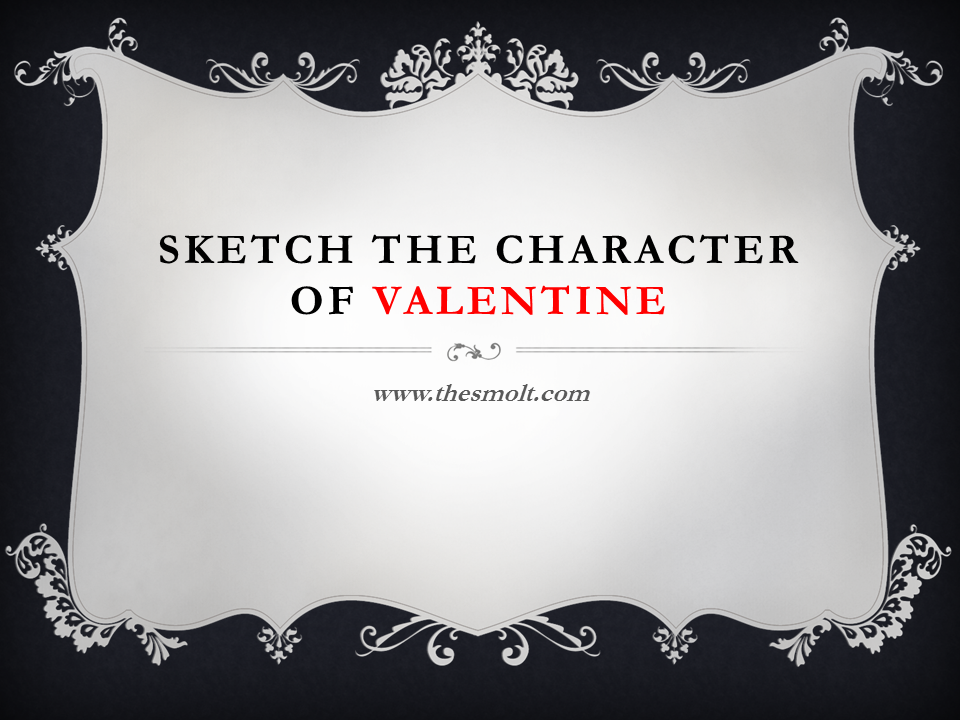