Ans. Twelfth Night is a love-comedy. It has been described as the furest and merrist comedy which Shakespeare has written, ‘but it is not altogether a pure comedy, as there is a strain of ‘romance’ in it. Still, the ‘burlesque’ element is conspicuous and the ‘sentimental’ has a happy ending. twelfth night as a romantic comedy

The comic elements in other comedies consist of the spirit of satire, wit, and ridicule and their object is to expose the follies and foibles of men and women as they struggle for happiness and worldly success. But in the matter comedies of Shakespeare as in Twelfth Night, although there is plenty of fun and wit, even of ridicule and satire, they are never allowed to gain ascendency over the gentle spirit of gaiety in the play as a whole.

It is with this object in view that Shakespeare introduced a deep tinge of romance, especially of the romance of love, which transforms the comic element into a contributory factor to the total impression of gaiety and happy equipoise.” ‘Romantic love’ by its very nature is blind and cannot maintain its position in the full glare of reality and common- sense, as it is somewhat removed from ordinary life.

Love by itself tells to be a high passion which is extravagant in that there is in it some kind of remoteness from ordinary life. Almost all the characters in Twelfth Night in the main plot particularly live, move, and have they’re being in a rainbow world of love in idleness. The intensities and realities of life shimmer into smoke and film in that thin, rarefied and delicate air. Twelfth night as a Romantic comedy

Twelfth night is a romantic comedy

The inhabitants are victims of love-fancy which is engendered in the eyes of youths and maidens who dally with the innocence of love, votaries of love. “Who kissed his wings that brought him yesterday And fraise his wings today that he is flown.” Whatever is romantic thrills with poetry and the raging passion of youthful hearts. So a romantic atmosphere is full of sighs, sons rhapsodies of loving, courting, wooing and cross wooing.

The very atmosphere in which all these romantic activities take place is also removed from reality, a Illyria is, a fairyland of fancy to which the poèt has attached as name, but which geographically does not exist anywhere in this matter of fact world. ‘The Elyria’ of Twelfth Night is no less imaginary and indefinite a realm ‘Bohemia’ of The Winter’s lale, and the vagueness is appropriate to a romance. Equally indefinite, of course, is the period on which the events are supposed to have happened.”

Shakespeare’s later removed from the ordinary course of human experience and characters are laid in a strange land which is also removed from reality. Shakespeare has thus the unique capacity of making romantic the ordinary work-a-day events of life and of making romantic the most imaginative and improbable character and events. Shakespeare has no doubt occasionally violated probability. Twelfth night as a Romantic comedy

But we should remember that his chief aim is the delight his audience in an age of romance, who were not accustomed to balance probabilities or to examine nicety the proper relation between cause and effect. Coleridge says, “The true pleasure we derive from theatrical arises from the fact that they are unreal and fictitious, as the business of the dramatic artist is to imitate life but not to copy it as in a photograph.

For example, the disguise of Viola which is also a rich source of comedy is so strange and novel that its probability remains without question in the fairyland atmosphere of Ilyria.” In this play, Shakespeare’s main purpose was to deal with various aspects or kinds of romantic love and the effect of love on the characters in different situations. Twelfth night as a Romantic comedy

She imagines herself as sitting like “Patience on a monument smiling at grief” because owing to her disguise and out of a sense of loyalty to her lord, she is prevented from seeking a real satisfaction for her love by speaking out. This situation Is highly romantic but not quite real. Because of her deep and sincere love for the Duke, she falls to perceive that he is but a vain egotist incapable of sincerity and constancy, even as a valet she knowS her master most intimately.

Such love is, indeed blind. She is so madly in love with the Duke’s handsome page that she is unable to see through the disguise. with all her womanly instinct. If she had been a little move observant, she undoubtedly has bean convicted how much Cesario lacked a man’. Inspire of her resolution to cluster himself for seven years to keep fresh a ‘brother’s dead love’. She falls desperately in love with the Duke’s handsome page, forgetting her rank within less than seven years.

This sort of thing is possible only in the case of a romantic love situation. Strange indeed, is the love of the Duke, whose “nature, but in opal, who fancies himself to desperately love with Olivia, but in reality only in love with all the time, and who loves music, “the food of love” but not the object of his love we almost feel that the duke preferred to court Olivia by proxy least he would be taken at his word and be accepted by her.

Malvolio’s love is also a fantastical and romantic as the Duke himself in his love. Shakespeare has effected a ‘happy compromise’ between love, which is serious and a raging passion of a human mind, and comedy, whose object to assume, in the romantic comedy. He has presented before us in the Twelfth Night. Twelfth night as a Romantic comedy

“In the romantic comedy, both the sighers (lovers) and the laughter live side by side, like good neighbors on only on condition viz., that neither shall commit excess or compete for attention at the expense of the other. The solemnity of love is relieved by the generosity of laughter (comedy) and the irresponsibility of laughter by the serious of love.

This is the principle of Romantic comedy and for a compromise how admirably it works. Surely, no one has managed it so well as Shakespeare by a happy alternation”. Twelfth night as a Romantic comedy. 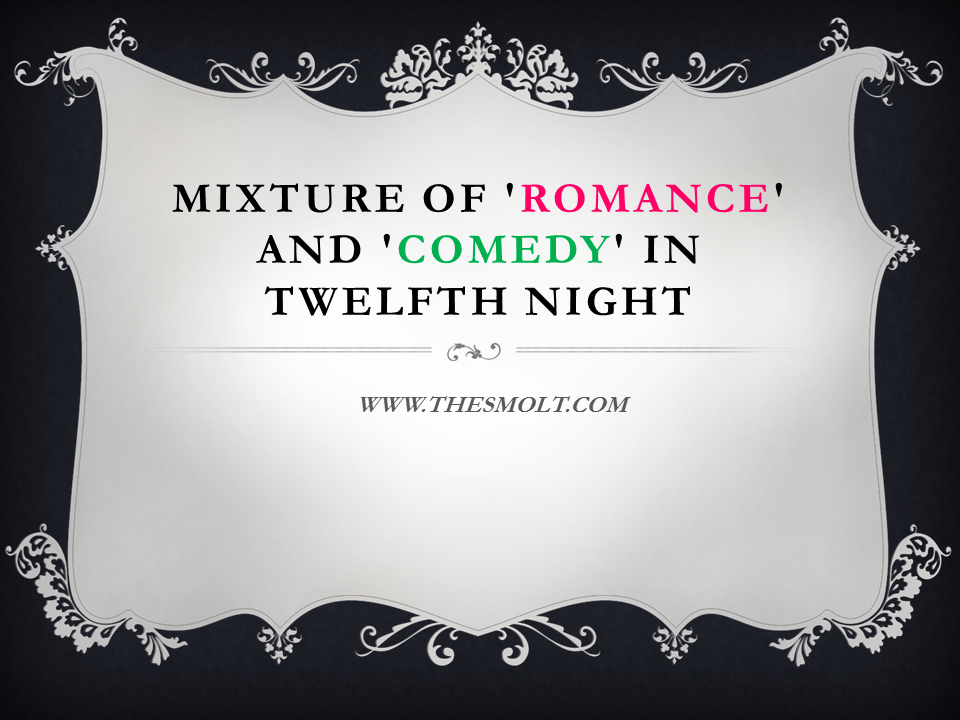