Ans. The dignified elegance of her department inspires respect in all. Before the opening of the play, she has lived a life of noble self- restraint. She has a great lady in her youth, who has had whatever she had wished for, who has never in her life been opposed-and whose will has been her only law. She has earned an honorable name with persons of all classes. Character sketch of Olivia in twelfth night

The Captain speaks of her ‘as a virtuous maid’, the daughter of a count who died twelve months ago, leaving her to the protection of her brother, who shortly after died also. She is a wealthy heaviness, geat and dignified and conscious of her proud position. There is a kind of dignified elegance in her general bearing before all.

She is consistently cold towards the Duke, whom she has known for many years. Sebastian is struck with how she can sway her house, command her followers. She preserves her dignity even when she loves her heart to the page and is no longer ‘queen O’er herself. She has a strong sense of honor which she is not prepared to compromise to win Viola’s love. Character sketch of Olivia in twelfth night

Character of Olivia in twelfth night

Everything in her surroundings bears witness to her austere temper. Though at times she is playing with her household servants and permits the fool, for instance, to engage her in coit combats, she maintains a measurable distance between herself and infectious. Even with her maid. Maria, she never talks in a familiar tone.

She is critical of her steward, Malvolio, to whom she lives the management of her house. Her reply to steward, when by way of scorching the clown, he marvels that her ladyship takes delight in such a barren rascal gives the true texture of her mind and moral frame: “O, you are sick of self-love, Malvolio, and taste with a distempered appetite.

To be a generous, guiltless and free disposition, is to take those things for bind-bolts that you deem of cannon-bullets. There is no slander in an allowed fool, though he does nothing but rail; nor or no railing in a known discreet man. Character sketch of Olivia in twelfth night

though he do nothing but reproves.”-She rules her household, with a smooth. discreet and stable hearing, until at the first sight of the disguised Viola, “She flames out into passion and careless of the traditional reserve of her sex takes the most daring steps to win the supposed youth,” forgetting the distance in rank which separates her from the page.

In the matter of love, she handly knows her mind and displays an amazing lack of self-restraint. In her previous life, she has never been contradicted o apposed and she has had a wish granted. Her wilfulness comes out in bold relief in her sudden passion or rather fancy for the disguised page. Character sketch of Olivia in twelfth night

S cannot hide her passion, she flings her frank confession of love into Cesario’s face; Now wit for reason can her passion hide” When Cesririo declares that no woman has any claim to his love. The first contradiction and refusal in her life “rouses all the woman in her and turns a caprice into a headlong passion. Love comes to her as a kind of punishment for her coldness.

She calls it a most extracting frenzy”, and indeed, it savors more of madness than of anything else we know of. She is fully conscious of the unreasonableness of it and armpits to fight against it but finds it irresistible. She is the last person, one would have concealed her is mastered by a greater passion than her pride.

She would have concealed her love but her control over herself is not equal to the task. “A murderous guilt shows not itself more soon. Than love that would seem hid; love’s night is noon” That she does strive against this mastering passion is evident from her words. Character sketch of Olivia in twelfth night

“I have said too much in a heart of stone, And laid my honor to chart out, There’s something in me that reproves my fault, But such a hed strong potent fault it is reproof.” That it but mocks The facility of struggle the expresses in language strong enough in itself, but acquiring additional force on the lip of one who is habitually sober and careful in her conversation: “A fiend like thee might bear by my soul to hell”. 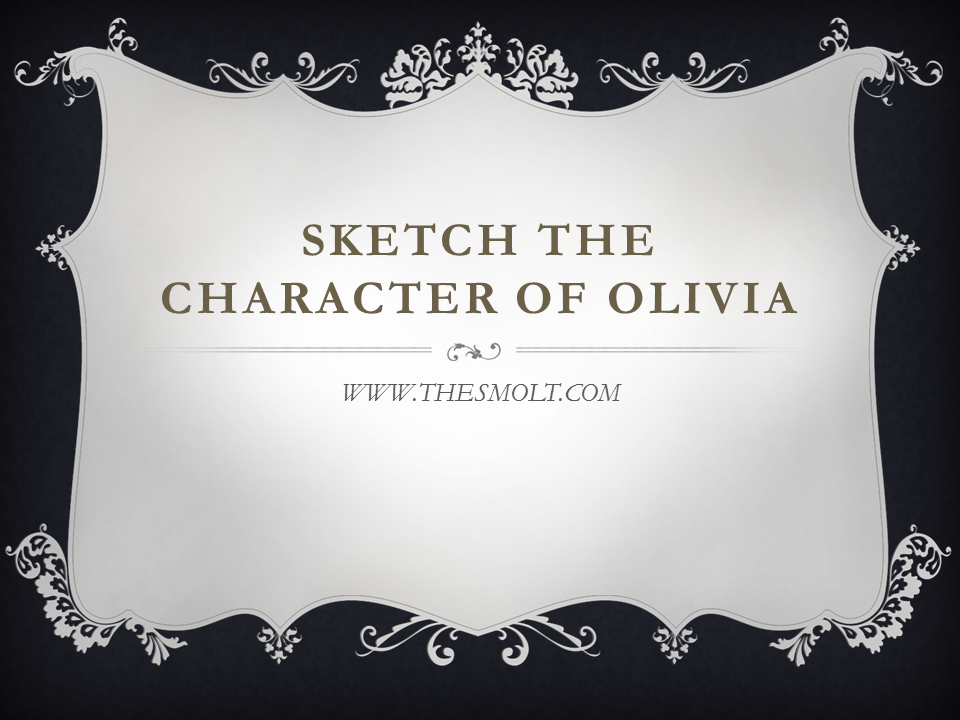