Ans. Ben Jonson was the leading literary figure during the Elizabethan period in the English language and literature. It was he who had left a remarkable effect in English literature. He was called the literary cynosure of the age. Write Short note on Ben Jonson

He was the great critic and scholar of the Elizabethan age and was well versed in the theory and practice of classical drama. He had sought to reform the dramatic literature of its extravagances. His great merit lies in introducing realism in drama. He made drama as a mirror of life and brought it closer to the realities of life.

Ben Jonson’s first comedy was, ‘Every-man in his humor’ which is a realistic comedy of London life. It was this play which made Ben Jonson as the harbinger of the new comedy and humor. His second comedy was, ‘Ever man out of his honor’ which depicted the character of a harsh and pitiless judge.

His other important comedies were Cynthia’s Revels’ and ‘Poetaster’, Both these comedies are satirical in tone. In his next play, ‘Sejanus; Ben Jonson carried his theories of art into tragedy. In 1605, Ben Jonson produced his great masterpiece “Volpone’ which is a powerful morality play. He produced ‘Silent Women’, in 1609.

The Alchemist in 1610, ‘Catilime’ in 1611, The Bartholo New Fair in 1614. He presented the characters in a delightful and interesting manner. All his comedies are rich in with glimpses of actual manners of life. As a dramatist, he sought to introduce reforms in the condition. His contribution lies in the art of characterization.

Ben Jonson as a dramatist

He has also adhered to rules and regulations, doctrines and principles. His love of rules måde him as a great master of realism. Ben Jonson was an egoist and his thoughts were too much of his excellence- as a dramatist. His characters rarely show any development. He could not succeed in the delineation of women characters.

His comedies lack the sentimental appeal because his outlook on life was always keenly intellectual. He also failed to impose his theories of dramatic art on the contemporary stage. But he was undoubtedly great in his intellectual vigor, his force and fierce attack, his doctrinarian sympathy with the classic and his realistic appraisal of life in comedy.

Who is Ben Jonson

He was deeply interested in giving a new lease of life on new principles and new grounds. It was he who presented serious thought to comedy and sought to restore it to its pride of place which it enjoyed in the days of Aristophanes.

He was the only dramatist among the Elizabethans who was eminently suited for the task of- orienting comedy. The contribution of Ben Jonson to the Elizabethan comedy was of a high order. Write Short note on Ben Jonson 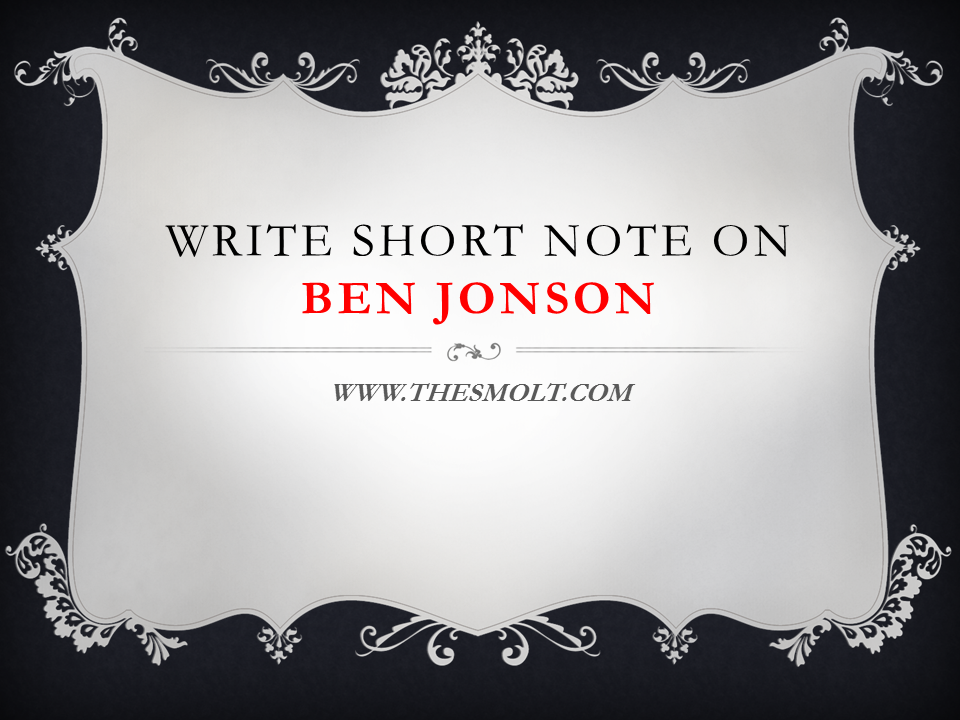