Ans. George Bernard Shaw was the leading playwright, seer, thinker, observer, humanitarian and Reviewer of Modern Age in English language and literature. He was greatly influenced by the thought of Ibsen. All the plays of Shaw are the vehicle of ideas. Write a short note on George Bernard Shaw

To make his views more explicit, he produced a long preface to his plays. His plays deal with thoughts and conflicts in an elaborate manner. The play, ‘Widower’s House. Deals with problems of society, ‘Mrs. Warren’s Profession’ (1894) is compacted with problems of sex. ‘Philanderer (1893-1905) is a satire on the attitude of Pseudo- Ibsenites towards women.

Arms and the Man (1894) is an excellent and amusing stage piece that pokes at the romantic conception of the soldier and carries true elements of his having philosophy. “Candida’ is a presentation of his standard of artistic brilliance. It deals with severely on the hollowness, meaningless and worn out conversation of society.

Shaw aims at completely purging the society form all senseless conception. Man of Destiny (1895-1897) deals with the character of Napolean. “You Can Never Tell’ (1899) deal with elements of wit and humor, The Devil’s Disciple; (1897) is a satire on melodrama and its construction is pretty and scientifically planned. “Caesar and Cleopatra’ (1898-1899) deals with two historical personalities as ordinary human beings.

Shaw presented Caesar as an embodiment of courage and convictions. ‘Captain Brassbound’s Conversion’ (1899-1900) is an art attempt to prove the futility of revenge. ‘Man and Superman’ (1903-1905) deals with the story of a woman’s pursuit of a woman in pursuit of her mate. It presents shaw’s idea of the Life force, working through human beings towards perfection.

also deals with a paradoxical situation where the attempts of the Salvation Army to remedy social evils can only be continued through the charity of those whose money getting policy has caused their evils. “The Doctor’s Dilemma’ (1906) is a satire of the Medical profession. “Getting Married’ (1908) is a satire on the conventions of marriage.

“The Showing-up of Blanca Postnet’ (1909) is a melodramatic piece about religious conversion ‘Misalliance’ (1910)contains a sort of inconclusive discussion of the parent-child relationship. The Darek Lady of the Sonnets’ (1910) is a witty play.

‘Fanny’s First Play’ (1911) deals with religion, Shaw tried to wreak vengeance upon his critics through the medium of this play. Androcles the Lion’ (1912) is an attempt to examine the nature of Roman Christian Religious experience. ‘Pygmalion’ (1912-1913) is a witty and highly entertaining study of class distinction.

It deals with social weaknesses and sočial conventions. “Heartbreak, House’ (1912-1921) deals with the disillusionment of the Upper class during the war years. ‘Back to Methuselah’ (1920) is concerned with the conception of the revolutionary forces. ‘John (1923-1924) deals with religion. Write a short note on George Bernard Shaw 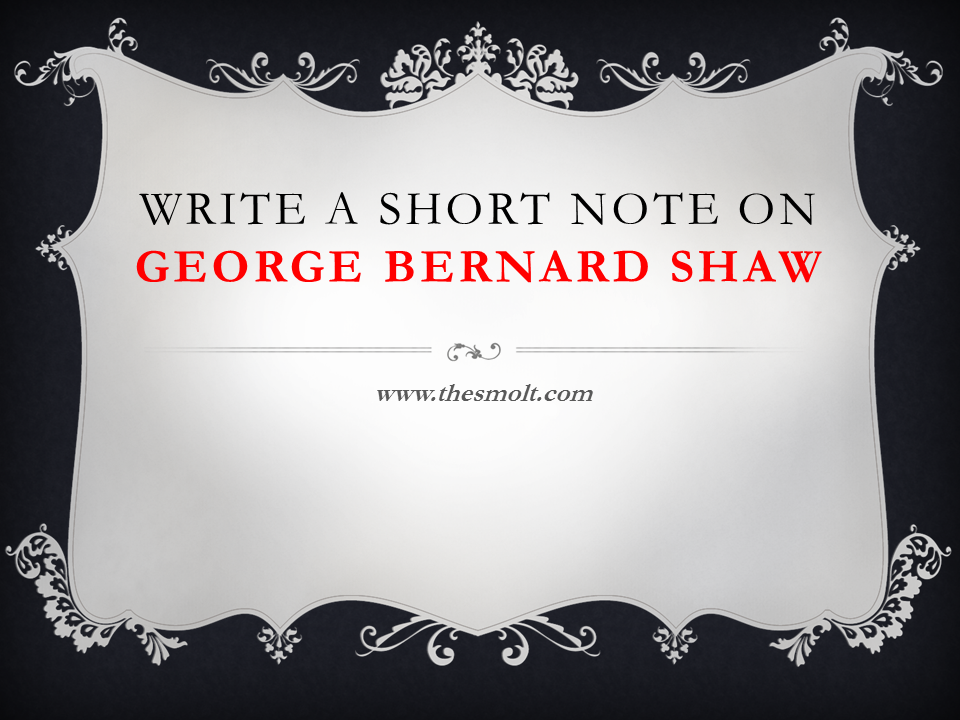