Ans. The English drama reached the highest point in the decade following Elizabeth’s death in 1603. Her successor, James I, had neither the glamour of Queen Elizabeth’s personality nor any greatness of his own. Briefly discuss on Later Elizabethan Drama

Early Elizabethan drama centered in the works of the University wits reflected the varied forced of the Renaissance the joys of humanism, the passions of the individual and the ideals of nationalism. But the Jacobean period was one of decline.

Naturally, Jacobean drama lost the optimistic nationalistic temper of early Elizabethan drama. The court of James I was full of intrigues and conspiracies. The interest in chronicles and romances subsided. Jacobean drama represents all these trends. Jacobean dramatists became highly satirical and critical of the evils of the times. The craze for money and power became dominant.

He is the very antithesis of Shakespeare. His classicism is in almost every way contrast to Shakespeare’s romanticism. As contrasted with Shakespeare’s romantic comedies and romances, he created the statistic, realistic Comedy of Humours. Ben Jonson’s comedy is based on what the Elizabethans called ‘humor’. The conception of humor comes from medieval medical science.

According to this conception, the human body has four senses of humor or moisture blood, phlegm, yellow bile (choler) and black bile (melancholy). The predominance or excess of any one of these humor profoundly affected a person’s basic temperament

Contemporaries and Successors of Shakespeare

Profoundly influenced by classical Roman comedy, Ben Jonson creates many stock- characters and situations. The comedy is realistic. It is an image of the times and sports with human follies and crimes. Every man out of His Humour is inferior to the earlier play, But it satirizes the absurd characters and fashions of the age. Jonson’s later comedies are more than comedies of humor.

Volpone or the Fox (1606) is a study of avarice (greed) on a heroic scale. It is considered Jonson’s greatest comedy. The Alchemist (1611) is a perfect example of satiric, realistic comedy. Coleridge considers it as a comedy with a well-constructed plot. It is the most perfect structure. Thomas Dekker (I570-1641) made his mark as a writer of Citizen Comedy in his famous play.

Drama in the early seventeenth century

The Shoemaker’s Holiday (1600). It is a breezy boisterous comedy in which the life of the London working class is treated humorously and romantically. Simon Eyre, the master-shoemaker, is a memorable comic character. Beaumont and Fletcher were joint collaborators in many plays. Their plays are romantic, witty, melodramatic,-and without moral seriousness.

Their most important work The Knight of the Burning Pestle (1607) is an excellent comedy with a burlesque (humorous limitation or caricature) motive. Some of the elements of chivalric romance are ridiculed in this play. Philip Massager, a highly popular dramatist, is well-known for his play, A New way to pay old Debts. Briefly discuss on Later Elizabethan Drama 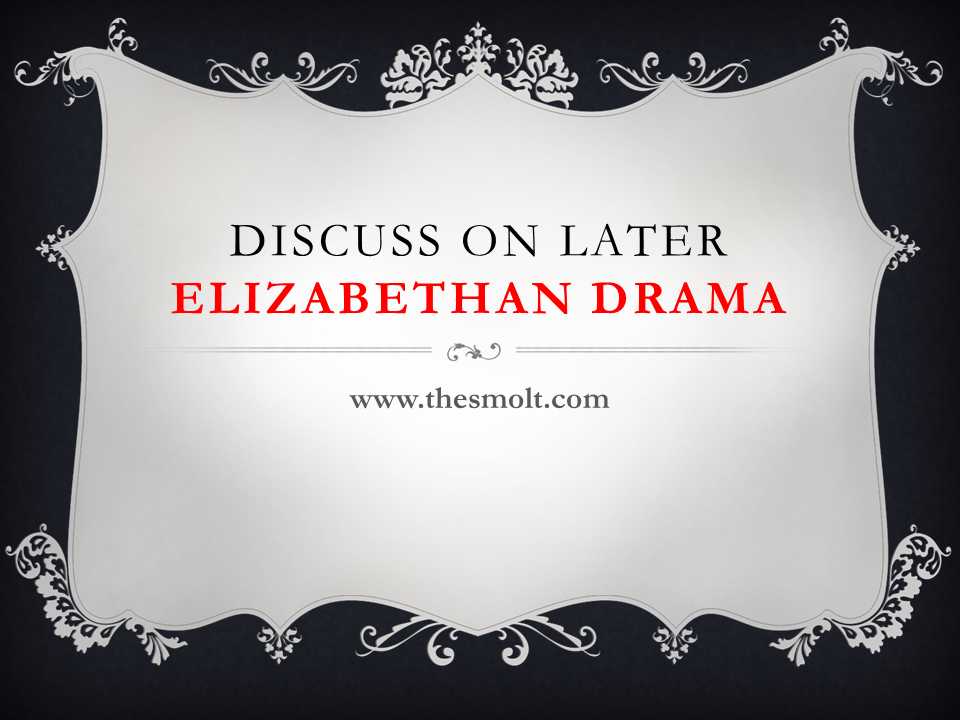