Ans:- Henchard is the leading male character of the novel ‘The Mayor of Casterbridge’, sketched by Thomas Hardy, the great novelist, seer, thinker, an observer of the Victorian period in the English language and literature. Character Analysis Michael Henchard

Read more from English 2nd Year (click) He is the cynosure of the play whereas all the rest characters and situations revolve around him. From the inception of the novel up to the end, his actions have left an indelible effect. He kept a gigantic personality and had faced the music of lite with undaunted courage.

He was living a statue of impulsiveness and emotional vehemence. His habits were passionate and of mighty gusto. His emotions and affection were tigerish and the manner of speaking was of ionic nature.

His gesture was strong and he did not care about the calamities of life. As a matter of fact, he was independent in likings and dislikings. His laughter was loud, long, and boisterous.

In his bitter hatred ness, he even thought of killing Farfrae. Due to his stupendous energy, he was crowned with the Mayorship of Casterbridge. Character Analysis Michael Henchard

In the character of Henchard, there existed unrestrained energy and vehemence. In the eyes of Hardy, he was a man of strong impulses. He suffered a lot due to his thoughtless and impulsive state of mind. His insensate jealousy blinded him in activities.

He even was thwarted of the love of his own daughter and led his life in a pathetic manner. Ws’ character was marked with gloominess. He kept beard which presented the impression of his gloominess. His gaze was ambiguous and inscrutable.

Even at the age of 18, he kept his disposition as taciturn and reserved. Christopher coney aptly Called him as a lonely widower. Even his prosperity could not. dispel the stars of gloom in his life.

Henchard was a strong believer in superstitions. He visited the weather prophet. Even the thought that the presence of of-the effigy was an intervention of mysterious invisible power. In fact, he kept his staunch faith in the irony of fate.

Henchard began his career as an ordinary hay-trusser and rose as a man of prestige and prosperity due to his sheer intelligence. He sold his wife and small daughter in a state of intoxication and for this, he had to suffer a lot.

Grimditch was of opinion that Henchard was an admixture of strength and weakness, Sullen obstinacy and open-heartedness, Envious spite with good nature and manners with generosity.

His tipsy nature had caused all the afflictions in his life and even in the state of intoxication, he made public action of his wife and daughter and later on the repented for it. He was a man of prejudice and haughtiness.

The Mayor of Casterbridge Character

He could not appreciate Elizabeth Jane. He could not play the second fiddle in his life. He bore misfortune with patience. It was due to consciousness which raised him above the level of the hay-trusser.

He showed the unique expression of courage but due to his mistake, his social prestige was shattered. In the words of Doffin, Henchard was a swift and unfiltered giant of impulse. 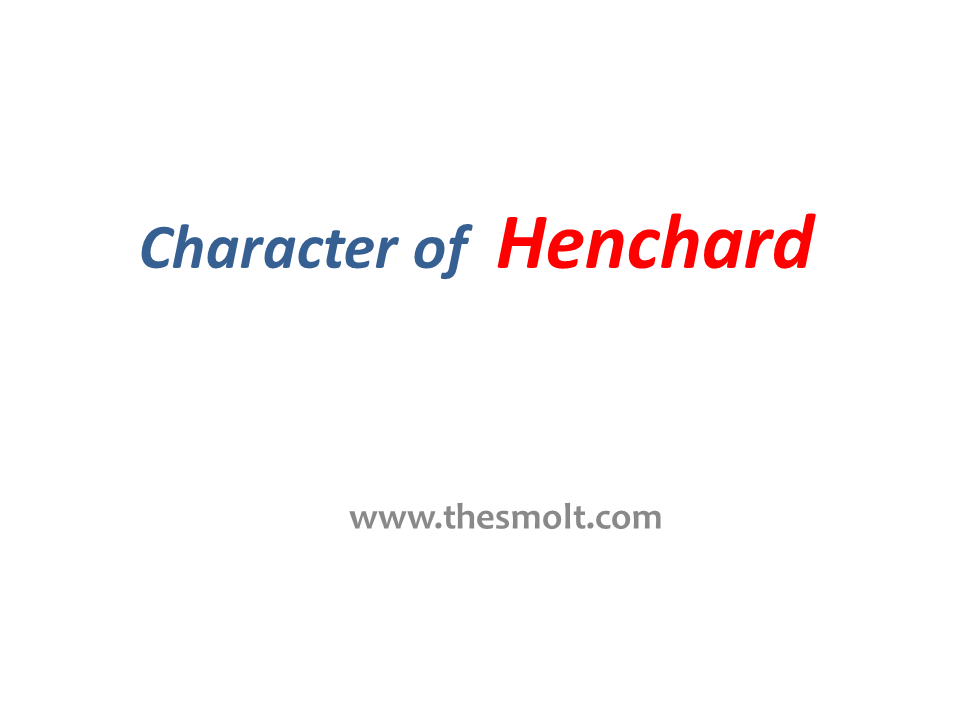 Sketch the character of Henchard

I hope you will understand better if you study at M.U, in the exam of M.U you know how important this “Character Analysis Michael Henchard ” .

So please don’t forget to give your valuable feedback. Go in the comment section and Give us some feedback about it. Character Analysis Michael Henchard or My website.

Note:- If you want to Download This article’s in PDF form, then simply go (Top or Bottom of) Right corner and click on the PRINT icon, and it’s saved as a PDF of Character Analysis Michael Henchard

Best Regards Character Analysis Michael Henchard, Kindly we request to you after Installing This Application, Please Don’t forget to give your feedback.