Ans. One of the striking characteristics of Middle English is its great variety in the different parts of English. In the absence of any recognized literary standard before the close of the period, the writers naturally wrote to the dialect of that part of the country (county) to which they belonged. Dialects of Middle English

They did so not through any lack of awareness of the diversity existed. The language differed almost from county to county and noticeable variations are sometimes observable between different parts of the same county.

Read more from 1st Year (click) The features characteristic of a given dialect do not cover all over the same territory, some extend into adjoining districts or may carry characteristics of another dialect. consequently, it was rather difficult to decide how many dialects, divisions should be recognized and to mark-off with any exactness in their respective boundaries.

There were four principal dialects of Middle English-Northern, East Mid-land, West Mid-land, and Southern. The northern dialect extended as far south as the Humber together cover the area between the Humber and the Thames.

Southern occupies the district south of the themes together with Gloucestershire and parts of counties of Worcester and Hereford, thus taking in the West Saxon and Kentish districts of old English.

Throughout the Middle English period, Kentish presented individual features marking it of a district variety of Southern English. There are salient distinctions in pronunciation, partly of vocabulary and partly of inflection.

The feature most easily recognized is the ending of the third person plural, present indicative of verbs. In old English, this form always ended in (-th) with some variation of the pre-existing vowel, and in Middle English, this ending was preserved as (-eth) in the Southern dialect.

In the Midland district it was replaced by (-en) probably taken over from the corresponding forms of the imperfect present verb and the verb to be, while in the north, it was altered to (-es) and ending that made its appearance in old English times.

Thus, we have (loves) in the North, (loven) in the Mid-lands and (loveth) in the South. Another distinctive form is the present participle before the spread of the ending (-ing).

In the North, we have ‘lovande’ in the Midlands lovende and in the South, ‘Lovinde. In later Middle English, the ending (-ing) appears in Mid-lands and the south obscuring the dialectal distinction. Dialectal differences were more noticeable between Northern and Southern.

The Midland dialect often ocçupies an intermediate position tending towards the one or the other in those districts lying near the adjacent dialects.

Thus, the characteristic forms of the pronoun, ‘they’ in the south were hi, here (hire, here), hem, while in the north forms with the-(Modern they, their, they became prominent. In the matter of pronunciation, the Northern and Southern dialects, sometimes (a-) which developed into a (Q) south of the Humber was retained in the North, giving such characteristics form as Southern, ‘Stone’ and ‘home’, besides ‘stane’ and ‘hame’ in Scotland today.

Initial (f) and (s) were often voiced in the South to (v) and (2), In Southern. Middle English, we find ‘vor’ vorm VoX’, vorzope’. Such variety was lessened towards the end of the Middle English period by adaptor of standard written English. Dialects of Middle English

Write a short note on the characteristics of Middle English Dialects 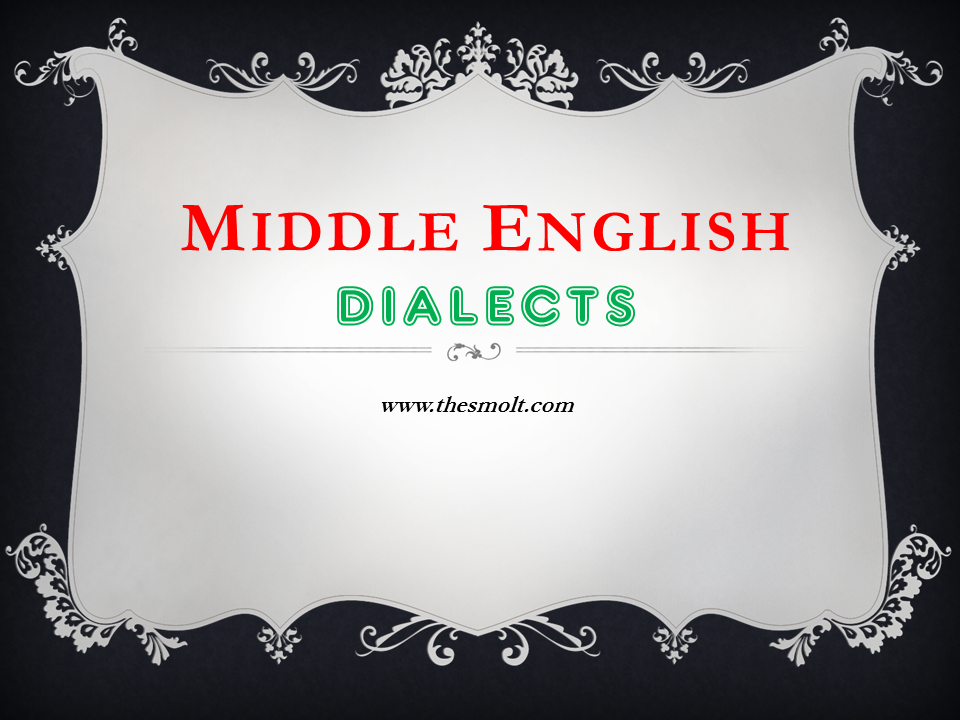 Hello, my dear student, I hope you learn something different here. So please don’t forget to give us your valuable feedback. Dialects of Middle English