Q:- Explanation of Jane Austen saw herself as a Critical observer, an interpreter of what actually goes on and she adopted the comic views as most illuminating as well as the one that appealed to her humor.

Ans:- Jane Austen had no theories of art, no moral or strong social prejudices, no wealth of perplexing idea. She had no philosophy to propound Undistributed by any external influence her marvelous vision enabled her to become a supreme observer of men and manners. Jane Austen saw herself as a Critical observer

She prided herself on having an invention. She distributed nothing that she had not seen. It is no paradox to say that her made limitations made her the incomparable artist that she was Jane Austen does not prefer good to bad, one man to another.

Read more from English 2nd Year (click) She never pauses to argue about the meaning of life; her one aim was to discover the hidden aspects to things, to relate what she had observed, and to give an objective rendering of it.
She knew very well that there was a great deal of fun to be got out of life, if a person will only take the trouble to look for it, and she set out on a deliberate quest for mirth.

Her mind was like a sensitive plate prepared to receive impressions, she was stirred to delight by ordinary matters which lift other people in a state of bank indifference.

The novels of Miss Austen are novels of manners and characters while those of George Eliot are of feelings. There is an ample amount of clear incisive humor and comedy of manners in the novels of Jane Austen.

Her novel shows that she looks at human beings and their mutual relationship as the proper subject matter of function. But she well represented the feminine point of view, their feelings, and emotions, their dealings behavior in relation to man.

Her novel does not exhibit Idealism, romance, poetry, or religion. She had taken a clear and syn pathetic vision of human nature. Her characters are not types but individuals. She exposes the familiar and commonplace emotions in human beings in the most interesting way.

She gives prominence to the themes of familiar interest to women. She presents men as they appear to women and thus she has a limited range of human experience. She portrays only the people she knows and the subjects they deal with are those of the feminine world alone – love, marriage, etc.

She confines herself to the speculations. Jealousies and rivalries in domestic life; deep passions are unknown to her. Jane Austen was neither an interpreter nor a critic of life. She once said to Mr. Butterpage, one of her publishers :

” I have never ventured to prove, critically into the mystery of human life “.

She was content simply to observe life and its activities. But even then, unconsciously, of course, her novels deal with some of the vital problems of life and thereby display her general outlook and philosophy.

She possesses a moral realistic view on the various problem of life, a view of the eighteen century of which she is considered to be the last exquisite blossom. Her view of life is not at all the romantic. She despises ideals, however lofty, if not practical.

She does not value emotion at all. She justifies love only when it is governed by reason and discipline by self – control. Her view of life is essentially comic. She feels that life is worth living despite the follies and inconsistencies.

This may be an imperfect view of life, is not sunshine. There are darker shades, also, But Jane Austen thinks that life has plenty of Joy to afford; only that attitude is required. She possessed this attitude. How does Jane interpret life, no matter though unconsciously?

What was her philosophy of life, if any? Authors often give themselves away by the metaphors, implied or expressed, which they apply to life. To some it appears as pilgrimage or quest; to others an evolution or process, to others a conflict; and so on.

Jane Austen as a Critical observer

Jane Austen did not deal in. Metaphors but it are possible to read between the lines and find an unwritten phrase that sums up the entire subject matter of her novels. She described life as a matrimonial game. Her general outlook on life is expressed in the themes of her books.

In Northanger Abbey and sense and sensibility, she satirizes that ” romantic philosophy which was sweeping the world in the early nineteenth century Romanticism referring all its judgments as it deeds to the guidance of the instinctive moments of heart and imagination, was profoundly alien to Jane Austen.

” In Northanger Abbey, she laughs at its superficial aspects. Catherine Morland is a simple girl who is always making fool of herself because she expects life to be like romantic novels, which are her favorite reading. Sense and sensibility are a more fundamental attack.

Elinor Dashwood guides her conduct by reason Marianne by the impulse of the enthusiastic nature: the story shows how experience proves. Elinor right and Marianne wrong . Pride and Prejudice exhibit the folly trusting to first impressions uncorrected by nature observation, Emma, Jane Austen’s profound comedy, satirizes the self – deceptions of vanity.

Emma is a clever woman whose confidence in her cleverness blinds her to reality. She depends on her life in trying to rearrange the lives of others, but her plans when putting into practice only reveal the failure to understand either the dispositions of people she is dealing with or the true nature of her feeling and motives.

Mans field park contrasts worldliness with unworldliness; the story illustrates the superiority of the disinterested Tanny and Edmund to crude worldly Bertrams on the one hand, and on the other hand, more subtly to the clever worldly Crawfords. Persuasion is about love.

In it, she criticizes unbridled love But in all those books. She is never vindictive never sentimental. This considered intellectual foundation makes the interest of Jane Austen’s books were far more serious than their surface appearance.

The quite comedies of country life deal with the profound the fundamental problems of human life and conduct. Thus we can safely say that. Jane Austen’s novels contain a highly serious criticism of life expressed in terms of comedy.

But she does not deliberately give this criticism and that makes her an observer of life and no, an interpreter of it. 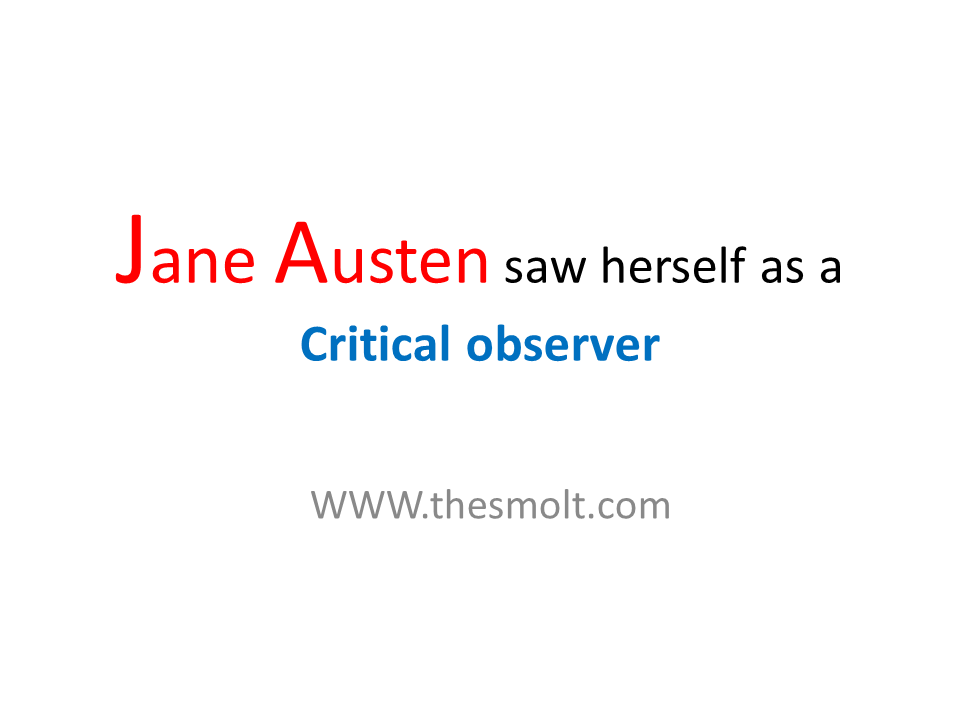 Note:- If you want to Download This article’s in PDF form, then simply go (Top or Bottom of) Right corner and click on the PRINT icon, and it’s saved as a PDF of Jane Austen saw herself as a Critical observer

Best Regards Jane Austen saw herself as a Critical observer Kindly we request to you after Installing This Application, Please Don’t forget to give your feedback.