Ans:- Jane Austen is ” a pure novelist “. A ” Pure novelist does not delight. Pride and Prejudice as a criticism of life

( 1 ) either by the prodigality of his invention or

( 2 ) by the creation of a large gallery of characters or

( 3 ) by the alternation of a large number of contrasting scenes.

Read more from English 2nd Year (click) The pure novelist’s criticism of life is an aspect of his design, it is the formal ordering of his material that in itself constitutes his criticism of life Perfection is achieved by recognition of one’s limits and Jane Austen is perfect precisely because she recognizes her limits.

She recognized her limits and achieved perfection, not in one novel but six novels consecutively. She has her interception of life to offer and her matter, her design is always subordinated to this end.

Essay on the realism of Jane Austen

As Watter Allen puts it, ” Jane Austen was a moralist an 18th-century moralist. ” She was the last and the finest flower of that century. But she is entirely free from 18th-century sentimentality, indeed sentiments are often the object of her satire.

She does not also indulge in the crude horseplay and buffoonery of the 18th-century novelist. She uses irony as her Weapon, as the instrument of her comic vision, The silly, the affected and the stupid and the objects of her contempt which get the driver and more withering with each successive novel.

Her ironic treatment of folly, silliness, and affection is a moral comment. The main emphasis in Jane Austen’s work is on manners which she reads as morals in microcosm.

Pride and Prejudice Essays and Criticism

( 1 ) that errors and follies of youth are always the results of faulty upbringing Lydia is so frivolous and giddy and she slopes with a ” worthless ‘ person like Wickham only because she is a neglected and spoiled child. She has been looked after by her parents. “

( 2 ) Any deviation from the accepted code of manners is likely to have unhappy consequences. The world of her novels is a restricted world, but in her Judgment on character and action in this limited world, she is so uniformly right that she feels she would also be uniformly right in her judgment in the large world outside.

His method of character delineation is superb, but what gives her characters their value is the fact that is through there that the novelist presents her view of life which is a highly serious criticism of life expressed in terms of comedy.

” Comedy deals with the ” Conflict between illusion and reality ” and this is also the conflict in the novels of Jane Austen. She shatters the follies and illusions of mankind and thus makes it know the truth She Judges her character by the Tripple standards of goodness, sense, and taste.

Those who fall below these standards are censured Her characters expose themselves in their own words so that we know them through and through and can imagine them in situations in which she never described them.

The attainment of self – knowledge on the part of the central figures is always Jane Austen’s theme and self – knowledge results in goodness. Thus Elizabeth gradually discovers the truth and sheds her prejudices.

She has been proud of her discernment but she finds that she has been wrong in judging both Darcy and Wickham. By the end, she realizes her folly and her prejudice. Life or she is thus a continuous process of increasing self – knowledge.

Experience teaches us how to live wisely and temperately and so also happily. Happiness comes out of internal harmony and also through harmony with the rest of the world. All her novels, even Pride and Prejudice are educational novel.

She is concerned with the achievement of perfect marriage as essential for happiness, for it is the chief of human relations, it is necessary for happiness, as well as for the development of personality.

By the end of Jane Austen’s novels, there is always the achievement of self – knowledge ‘ self-control, and self – respect and the principal means of such an achievement is a legal of perfect sympathy with another who is one’s counterpart.

She does not sentimentalize love. She does not glorify it like earlier novelists, but her conception of genuine love is loftier than theirs. She is a practical idealist.

She realizes the value of money and comfortable living for a happy marriage, she has no illusions, about love in a cottage “, but she also realizes that married happiness depends not so much on worldly circumstances as on mutual harmony between the marriage partners.

Similarly, she recognizes the presence of evil and tolerates it. Wickham is not even reformed by the end of the novel, and Lydia remains as silly and irresponsible as ever. Pride and Prejudice as a criticism of life 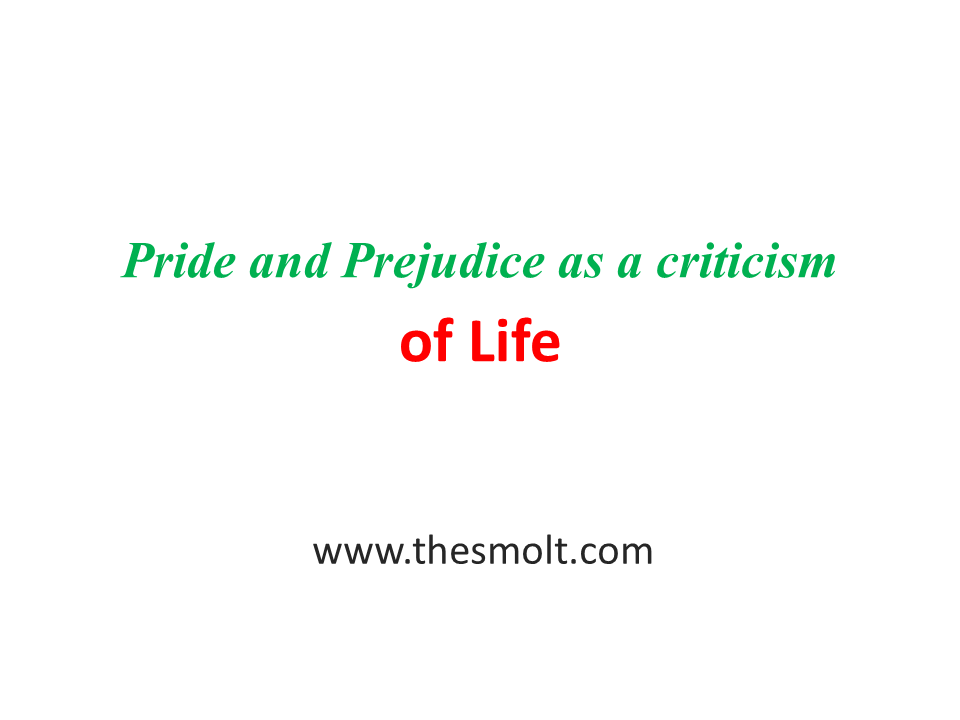 Note:- If you want to Download This article’s in PDF form, then simply go (Top or Bottom of) Right corner and click on the PRINT icon, and it’s saved as a PDF of Pride and Prejudice as a criticism of life

Best Regards Pride and Prejudice as a criticism of life Kindly we request to you after Installing This Application, Please Don’t forget to give your feedback.

The Development of Realism in Jane Austen’s Early