Ans. Of all the languages in the world, English has the most heterogeneous and the most varied vocabulary. The borrowings from Latin continued through the old English, period and attained large proportions in the 14th and 18th Centuries. Latin borrowings in English

Read more from 1st Year (click) The adoption of Latin words by the Anglosaxon tribes had begun long before they have left their continental homes.

They had been in contact with the civilization of Rome and had resulted in borrowings like street, wine, butter, pepper cheese, silk, pound, mile, mint, etc. The coming of Christianity to England brought with innumerable Latin terms words like the minister, monk, bishop, mass, church found their way into English vocabulary.

The largest number of Latin loans in old English was introduced as a result of Latin learning and science. The names of many hero’s and trees were thus received into English from Latin.

During the old English period, Latin had come to enrich the English vocabulary by the many translations of Latin compound words. During the Middle English period many Latin words like pauper, proviso, equivalent, legitimate, index simile memento, diocese, mediators, collect, and others cure introduced.

Write a note on Latin borrowings

Latin culture had influenced English throughout its history with many fluctuations. The medieval Latin from which many words were borrowed into English was spoken by the elegy and learned mess of the country.

During the 16th to the 18th Century, it was the usual practice to write scientific and philosophical works in Latin. The practice of coining new words from Latin elements for expressing technical or scientific ideas has been continued into modern times.

The writers of the 17th Century used Latin words in their works. The writing of Milton and Sir Thomas Brown seem were full of Latin terms.

Write a note on Latin borrowings in English

In the 18th Century, the Latin words like the nucleus, inertia, alibiulti matum, extra, insomnia, bonus, and others were introduced into English. The 19th Century was marked by Latin loan words like opus, ego, moratorium, referendums, and bacillus.

There are thousands of words that have been anglicized by taking on native endings or reductions. Latin suffixes like -ale (as in eradicate)-ie (as in elliptic) and al (as informal) have become part of the language.

Thus ‘h’ was added to the words humble, on our, abit (humble, honor, habit). The letter b was inserted in debt. The relation between Latin fallers and English fault was established by inserting the l in fault.

The letter p was inserted in a receipt. Latin loan words left a tremendous effect on the English language. It enriched English vocabulary to a great extent. Latin borrowings in English 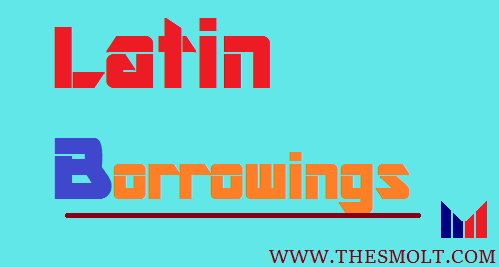