Root Creation is a term in WORD-FORMATION for the creation of a new ROOT, BASE, or simple WORD. The process is rare compared with compounding and derivation, and is divided into motivated root-creation a

“Contamination” is a process that is viewed as damaging to the “receiving” language.

An acronym is a word or name formed as an abbreviation from the initial components in a phrase or a word, usually individual letters (as in NATO or laser) and sometimes syllables (as in Benelux). There is no universal standardization of the various names for such abbreviations and their orthographic styling. In English and most other languages, such abbreviations historically had limited use, but they became much more common in the 20th century. Acronyms are a type of word formation process, and they are viewed as a subtype of blending.

Folk etymology the process by which the form of an unfamiliar or foreign word is adapted to a more familiar form through popular usage. Folk etymology, pseudo-etymology or reanalysis is the change in a word or phrase over time resulting from the replacement of an unfamiliar form by a more familiar one. Unanalyzable borrowings from foreign languages, like asparagus, or old compounds such as sampling which have lost their iconic motivation (since one or more of the morphemes making them up, like sam-, which meant “semi-“, has become obscure) are reanalyzed in a more or less semantically plausible way, yielding, in these examples, sparrow grass and sandblind.

Analogy is a cognitive process of transferring information or meaning from a particular subject (the analog or source) to another (the target), or a linguistic expression corresponding to such a process. In a narrower sense, the analogy is an inference or an argument from one particular to another particular, as opposed to deduction, induction, and abduction, where at least one of the premises or the conclusion is general.

Analogy plays a significant role in problem-solving, as well as decision making, perception, memory, creativity, emotion, explanation, and communication.
Derivation- Derivation stands in contrast to the process of inflection, which is the formation of grammatical variations upon the same word, as with determining/determines/determining/determined.

The derivation is the formation of a new word or inflectable stem from another word or stem. It typically occurs by the addition of an affix.

The derived word is often of a different word class from the original. It may thus take the inflectional affixes of the new word class.

The term composition has multiple meanings.
The process of putting words and sentences together in conventional patterns. 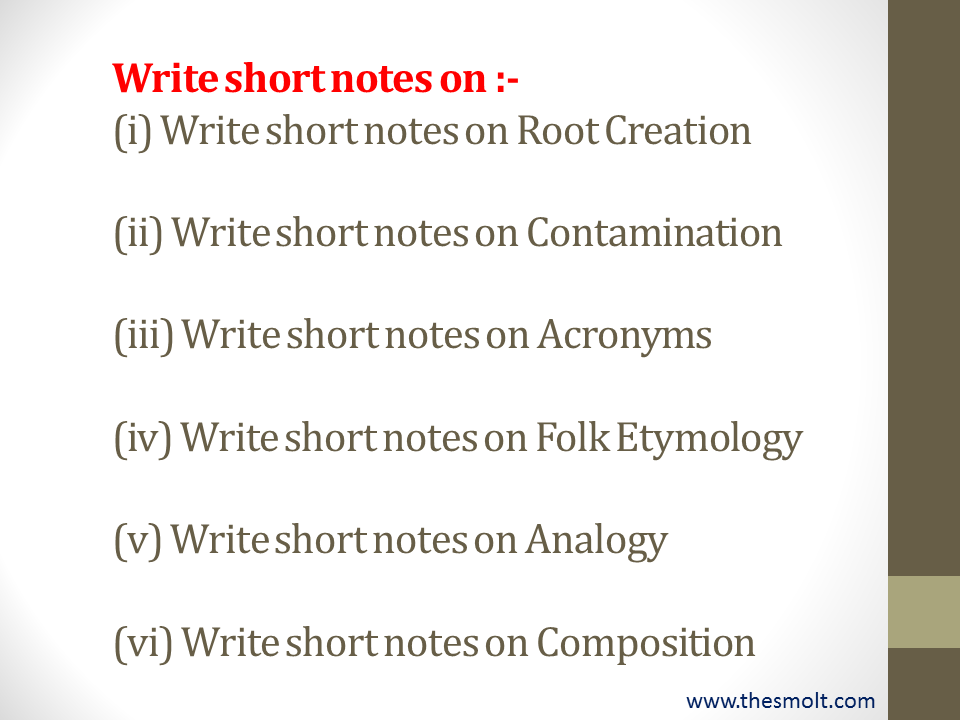