He was a thinker and he worried about god, nature, and man. He wrote on classical, romantic and modern subjects. The earliest collection of Tennyson’s poem was published in 1827. His volume of poems (published in 1833) showed steady advancement in poetic form. His poems, The Lady of Shallot’, ‘O Enone’, ‘The Lotos Eaters’ and The palace of Art’ are masterpieces of poetic art and metrical skill.

In 1942, he produced Ulysses’ and ‘Locksley Hall”. In 1847, Tennyson produced The Princess a Medley’. It is the first long and elaborate poem. It deals with the education of women and their claim to social and political equality with men. The tone of this poem is seriocomic.

He composed lyrical poems- Tears, Idle Tears and The splendor falls on castle walls’ in 1850. He wrote ‘In Memoriam in which he expressed bitter experiences of unparalleled loss to him. In this book, the great conflict between faith and doubt is exhibited.

This book is compacted with varieties of moods and is an exposition of the cautious spirit of Victorian liberalism. Tennyson was essentially a great poet of law and order as well as of progress. This book contains one hundred and thirty-one lyrics. The note of grief is deep and poignant but gradually, the personal pain merges into anxious speculation.

In 1855, Tennyson wrote ‘Maud and other poems. In 1859, 1869, 1889 he brought out a series of Idylls of the king. His important poems are, “The Charge of the Light Brigade’ and The Two Voices’ In Maud’, Tennyson produced a lyrical monologue of 1200 lines. It delineates the story of love, death, and madness. Its matter is iambic.

Tennyson employed blank Verse in ‘The Princess’, ‘English Idyll’ and ‘Idylls of the King‘. His merit as a metrical artist lies in three directions. His mastery in vowel-music is unparalleled. Tennyson wrote three historical plays-

In these plays, he sought to dramatize the national history of England. ‘The Falcon’ (1879) is a comedy based on a story from Boccaccio. “The Cup’ (1881), owes its inspiration to Plutarch and ‘The Foresters’ is a dramatization of the Robin Hood theme.

He was a great pictorial artist. He was gifted with unrivaled powers of picturing a scene. His poem, “Eagle’ is a poem of six lines but it is a fine piece of pictorial painting. Tennyson was an artist of a high order.

Like Keats, he was a conscious and deliberate artist. Clarity and Jucidity are the chief traits of Tennyson’s art. He was the scintillating star and his literary creations are the great treasure to English literature. 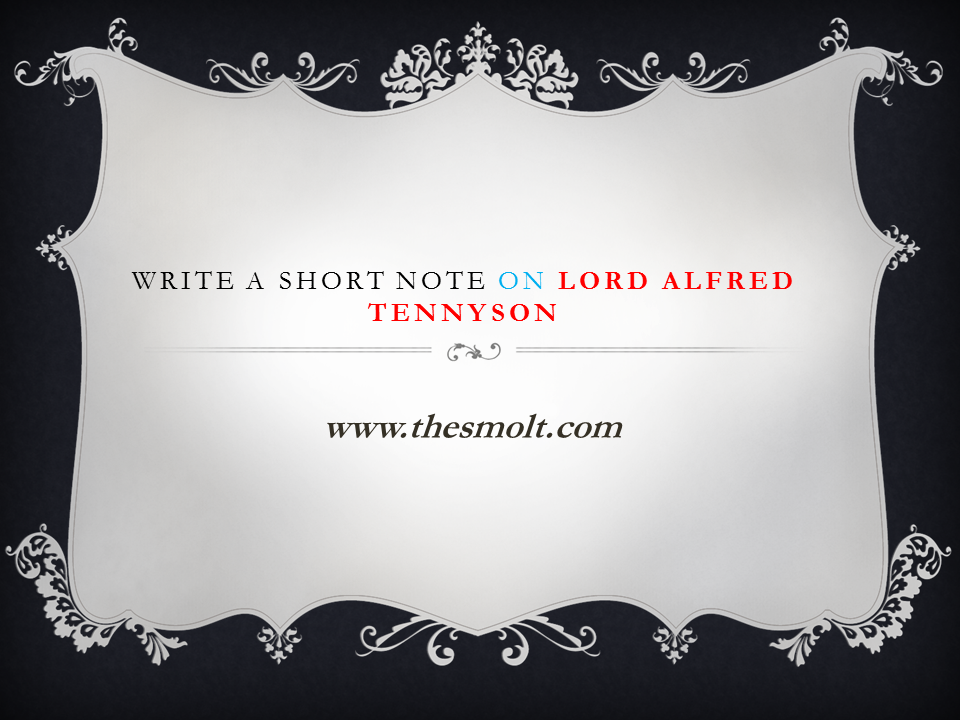