Ans:- There is no character funnier in the novel than Mr. Collins. ” He is vastly stupid and Vastty funny. ” He was extremely foolish by nature and there were no good home influences to improve him. Mr. collins in pride and prejudice

He had an uneducated and miserly father, still, he was sent to one of the universities where he did not mix with his fellow students and so one of the chief advantages of University education was lost to him.

Sketch the character of Mr. Collins

Read more from English 2nd Year (click) This father always treated him with great severity and consequently we find him most servile to people whose position is superior to his own.

On the other hand, his good fortune is getting a living at such an early age has made him conceited and Pompous. The was exceedingly proud of his position as a clergyman and was constantly referring to it, in season and out of season. Mr. collins in pride and prejudice

Who is Mr collins in pride and prejudice

At the hall of Bingly he made an uncalled for speech in which he dealt with the subject Again when making an offer of marriage to Elizabeth, he held out his position as the greatest advantage he had to offer.

To lady Catherine, he was always servile and though she always treated him as a servent, his nature is so contemptible and mean that he felt flattered by any advice she might give him, no matter how rudely worded it might be.

The letter he writes to Bennets after the elopement of Lydia, reveals his nature. It is intended to be a letter of condolence.

In it, he informs Mr. Bannet that has told all the details of Lydia elopement of Lady Catherine, who quite agreed with him that the family would be disgraced in consequence.

He then goes out to say that he is glad that Elizabeth refused him otherwise he would have been involved in their disgrace. Although he was so proud of his position as a clergyman, he had no sense of Christian charity and forgiveness Whenever Mr. Collins opens his mouth, he says something ridiculous.

A good instance of his foolishness is seen in the complements he is in the habit of composing and subsequently paying to lady Catherine. Owing to his never having had an opportunity of moving in polished society, we find him ever conducting himself in an extremely servile manner.

After the dance at Netherfield, he thanks the Bingleys for the politeness, they have shown to their guests, Again he can do nothing without apologies when he goes with his cousins of their aunt’s house, he apologizes for entering the house without a formal invitation.

His manness is well illustrated by his behavior towards Elizabeth after she had rejected his suit. On that occasion, the only reason for his mortification was that his vanity was hurt.

Mr. collins from pride and prejudice

Quite easily, he transferred his love to Charlotte and was as pleased with her acceptance as he would have been with that of Elizabeth. With him, there was no question of love at all J.B. Priestley explaining the reason for his not loving any of the ladies writes,

” small wonder that he should not be in love with the ladies, he proposes to, he is already in love with his astonishing position. “

Whenever Mr. Collins appears on the scene he makes us laugh and we can safely say that without him much of the amusement of the novel would have been lost. Others, like Darcy, may change and grow, but Mr. Collins remains fixed in his trails. Mr. collins in pride and prejudice 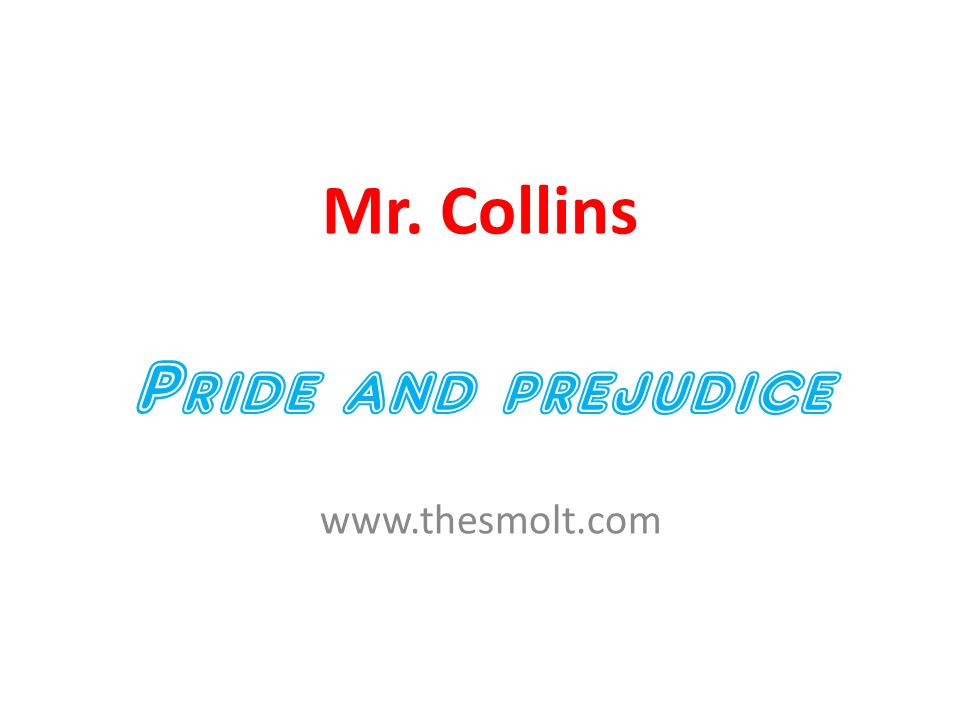 Note:- If you want to Download This article’s in PDF form, then simply go (Top or Bottom of) Right corner and click on the PRINT icon, and it’s saved as a PDF of Mr. collins in pride and prejudice

Best Regards Mr. collins in pride and prejudice, Kindly we request to you after Installing This Application, Please Don’t forget to give your feedback.