It was Milton who was recalled as a poet of steadfast will and purpose. He moved like a god amid the fears and hopes and changing impulse of the world. It is aptly remarked that he was a great exponent of humanity.

It was he who had studied with intense desire and profundity to music, art, and literature, He was quite aware of the transition of his age and he wanted to convey the great thoughts to the people. In his early stage of a literary career, Milton appeared as the great inheritor of English literature.

In his first poetic work; On the morning of Christ’s nativity Milton appeared as a great reviewer of high water-mark in the field of lyrical poetry, He composed more than two thousand poetic lines within a period of six years ranging from 1631 to 1637. Short note on John Milton

L’Allegro’ and Il Pensioners’ are twin poems containing many lines and short descriptive passages and are compacted with music and love. “L Allegro’ is an excursion into the English field at sunrise, There exists the depiction of sweet air, songs of birds, a multitude of sights, fragrances and the appeal of nature. ‘ll Penseroso’ describes the fields during sunset and sunrise period.

John Milton as a poet

A quiet thought takes place and brings the joyous and subtle sensation of the morning. The masque of comes’ is the perfect creation of Milton. In it, Milton delineated the simple theme. It is a mosque in form likewise gorgeous presentation of Elizabethan poetry. Lycidas is a pastoral elegy of Milton written in 1637.

In it, Milton followed the poetic custom of his age by representing both his friend and himself in the guise of shepherds, He also used symbolism by introducing satyrs and sea- nymphs, Milton also composed several Latin poems and he also presented sonnets to English literature, Among his well-known sonnets – ‘On his blindness’, ‘On his deceased wife To the Nightingale‘, ‘On his declared wife,” “To the Nightingale, “On reaching the age of Twenty three’, ‘and The massacre‘ in a piedmont‘ are of par-excellence in approach. Milton became very sensitive when he lost his right and became blind.

He was suffering from mental afflictions and agony. He wrote three immortal epic poems- The Paradise Lost’, Paradise Regained’ and “Samson Agonistic Paradise Lost’ is the greatest acknowledged epic in English language and literature, Adam, the Central Character is a prig while Satan looms up a magnificent figure, entirely different from the devils of miracle plays.

The son Raphael Michael the angles and fallen spirits were mouthpieces for Milton’s declamation. Milton wrote Paradise Regained which attained grim achievement for him. It is commuted with noel thoughts and splendid imagery. In ‘Samson Ganister, Milton presented a more vital and personal theme. In it, he aimed to present a pure tragedy.

Milton as a poet gained mammoth popularity. He wrote many prose works and among them, Aerobatic’ is of par-excellence. Short note on John Milton

It deals with Milton’s protest against displeasing authorities. Milton was bold in daringly presenting thoughts and ideas, It was he who superb thoughts. The characters dealt by Milton are the mouthpieces of his greatest thoughts and understanding. He was like a dazzling cynosure in the walking of English literature.  Short note on John Milton 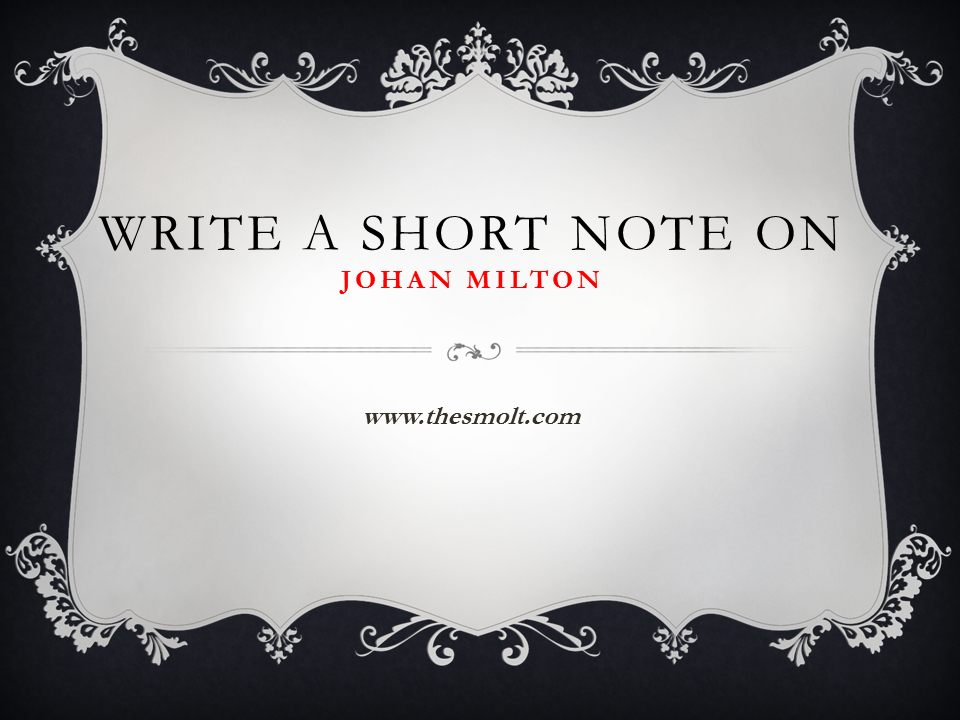