He began his Iterrary career in 1797 when his principal contribution was “The Ancient Mariner” which was written in 1797. The poetic career of Coleridge can be divided into four periods. The early period extends from 1794 to 1796.

During this period, he produced noted poems of loveliness and charm. The chief works of Coleridge are. ‘Ode to the Departing Year‘, ‘Ode to France‘. The Lime – Tree Bower’, Frost at Midnight: Fears in solitude. The third period extends from 1798 to 1800.

It has been regarded as the period where his genius was at its height. It represents the flowering of his genius at his best. It is during this period that Coleridge produced’ Ancient Mariner’, Christabel’ and ‘Kubla Khan‘.

Of these poems, Kubla Khan is an exquisite dream fragment, The other two poems exhibit the highest power of Coleridge.  Write a short note on Samuel Taylor Coleridge

The last period was a period of decline in Coleridge’s poetic genius. During this period, the great poems of Coleridge are, “Ode to Dejection‘, and ‘Love and Hope‘. The depiction of Coleridge lies in his faculty of evoking the mystery of things.

The conspicuous feature of his poetry is his intense imaginative power. Coleridge is the poet of supernaturalism. He is a great poet of nature. He remained throughout a subtle and minute observer of nature. Write a short note on Samuel Taylor Coleridge

I request you if you have any doubt or question regarding our site, then please don’t hesitate. We always waiting for your Suggestion. Note:- If you want to Download This article’s in PDF form, then simply scroll
and click on the PRINT icon and save it as a PDF Write a short note on Samuel Taylor Coleridge 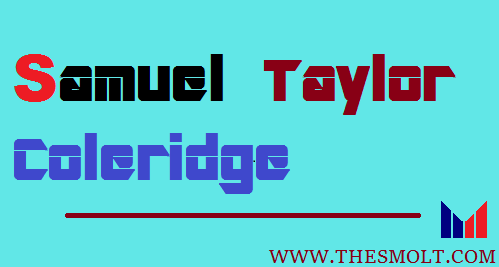